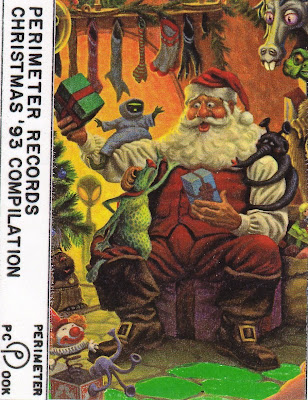 Here is the last of the Perimeter Records Christmas compilations, of course thanks goes out to Doug Hughes for helping to put these out and providing the history of the series. You can also download all of the Perimeter Records and Outer Loop series of compilations here. In this installment, you have quite a bit more Christmas-themed novelty music from My Evil Twin, as well as some ambient electronic soundtracks by Thompson, Hughes and Swartz and even an original number by the great Pineal Ventana. Sequence 3 and Routerwhelm get some experimental sound collages going, while Sphinctus Ignitus Pretensio takes the entire second half of the compilation with some bizarre avant rock. I'm not sure who was in that band, but there is probably a good story or two behind that one. 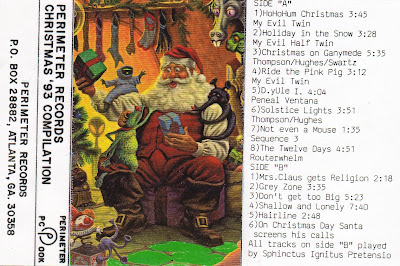 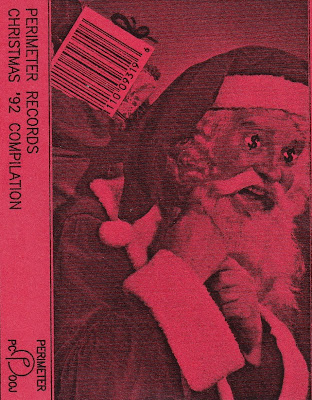 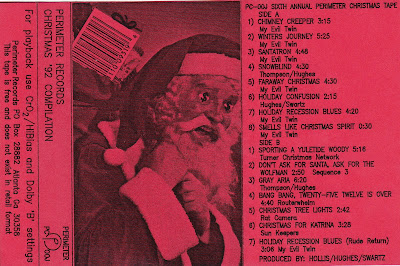 Posted by James Joyce at 4:00 PM No comments:

Daughter of the Flagpole Christmas Compilation 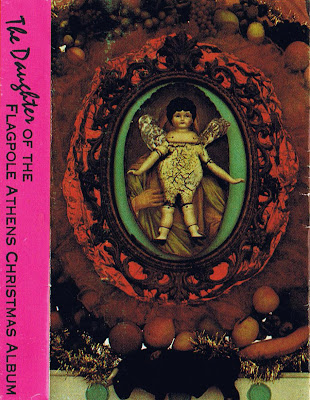 Here is the download: Daughter of the Flagpole Christmas Compilation

This is the third installment of the Flagpole Christmas compilations, from way back in 1992. Several Atlanta bands have made contributions (Jack O Nuts, Seersucker, Kevin Kinney, Follow For Now), as well as some Athens classics (Buzz Hungry, Bliss, Magneto). Even Widespread Panic contributes a song. My favorite from this tape is the Seersucker cover of "Santa Claus, Go Straight to the Ghetto" by James Brown, you just can't beat it, although the Bliss song is really good as well. Enjoy. 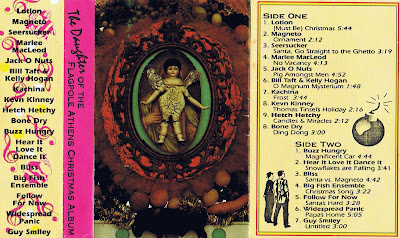 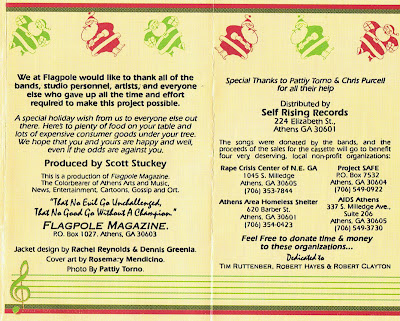 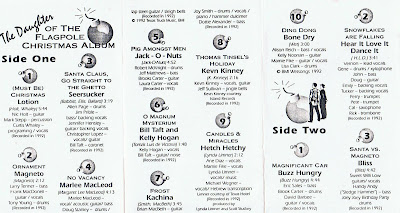 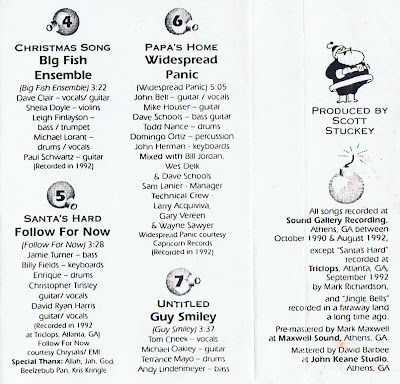 Posted by James Joyce at 3:47 PM No comments: 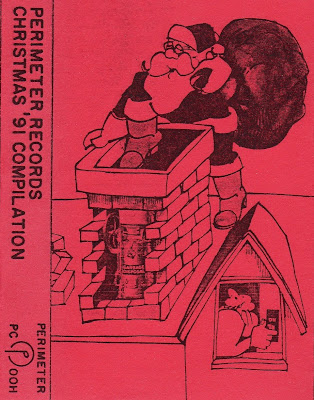 Here is the track listing:
1. Santa Claus by My Evil Twin
2. Solstice Winds by Doug Hughes and Chris Swartz
3. Santa's Coming by Robert Hollis
4. Christmas Comes But Once A Year (Thank Goodness) by Lilje and Swartz
5. Poor Old Santa by My Evil Twin
6. Merry Christmas Anyway by Swartz and Thompson
7. Bring Me A Cure by My Evil Twin
8. Just Say Noel by Doug Hughes
9. Jingle Bells by Electric Boat Division
10. Little Princess by Toast

This is the fifth annual Perimeter Records Christmas Tape, for your enjoyment. More late night Christmas themed sound collages and weird rock songs, mainly by My Evil Twin playing the part of the house band for the next few compilations. Credit is due to Doug Hughes for making it happen, and contributing the back story as well as the spookiest song on the compilation (Just Say Noel). 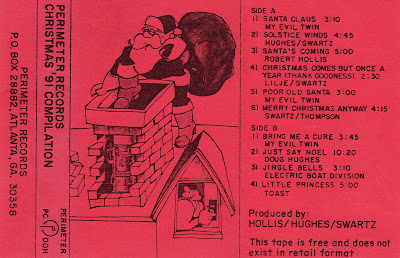 Posted by James Joyce at 4:44 PM No comments: 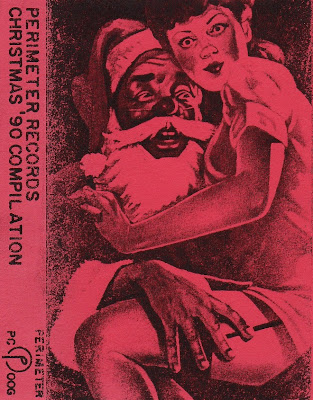 Here is the track listing:
1. Scuzza Claus by St. Nick's Evil Moronic Twin
2. Ice Crystal Reflections by Doug Hughes
3. X-Mas Part 6.4 by King Kill 33
4. Christmas Without Presence by Gene Thompson and Doug Hughes
5. The Moods of Christmas by King Kill 33
6. March of the Elves by Chris Swartz
7. I'm Dreaming of a White Christmas (90's Remix) by Todd Ploharski
8. Stranded on Drifting Ice by Doug Hughes
9. Santa Is Satan by Mitch Foy
10. Circle of Monkeys by I See The Moon
11. Northern Lights (On The Blink) by Gene Thompson
12. Keep Saying You Love Me by Mitch Foy
13. Alone On The Holidays by Gene Thompson
14. Happy Xmas (War Is Over) by Sequence 3

This is the 1990 edition of the Perimeter Records Christmas Tapes. Thanks again Doug Hughes for sending me everything related to these compilations, including the history of the series. This time we have some nice ambient electronic contributions by Doug Hughes, Chris Swartz, Todd Ploharski, Mitch Foy and Gene Thompson, but also some songs from the legendary King Kill 33, and the classic Scuzza Claus by St. Nick's Evil Moronic Twin, which will get stuck in your head for quite some time if you are not careful.

Ben Davis told me yesterday about some of the methods used to create some of these songs like I'm Dreaming of a White Christmas (90's Remix) by Todd Ploharski from this compilation, which involved skipping CDs in old CD players to make loops that can be layered into sound collages. At least I believe that was how this song was composed. I love hearing anecdotes about the inventive ways experimental electronic music was made before laptops turned everything into keystrokes. I guess you could make the case of the whole circuit bending culture as the descendant of this, but I don't want to step on any toes here.

Here is the complete artwork: 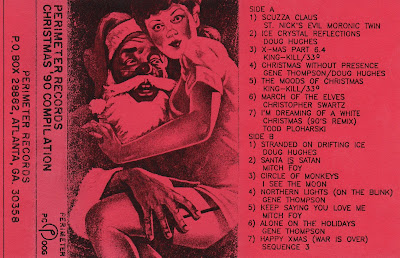 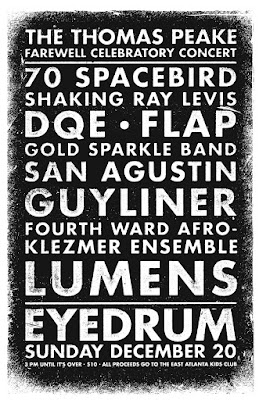 I just wanted to let you all know that there will be a memorial show for Thomas Peake next Sunday at Eyedrum, with all proceeds going to the East Atlanta Kids Club. As you can see from the list above, several classic Atlanta bands will be playing, including DQE, Flap, San Agustin, Gold Sparkle Band and Shaking Ray Levis. Seventy Spacebird was the pre-Noot d' Noot improvised band from the late 90's, which I have posted music from on this blog. Fourth Ward Afro-Klezmer Ensemble are old friends doing what they do best.

Perhaps most interesting is the debut of the new band Lumens including Benjamin Lukens on bass (The hal al Shedad, Ananke, Ultivac, Cough Syrup, Astrosmash, Amverts, The Forever War), Ben Davis on guitar (Noot d' Noot, Habeas Corpses, The Purkinje Shift, Moreland Audio, Home of the Wildcats) and Gary Flom on Drums (Rebar, The Purkinje Shift, Moreland Audio, The Forever War). They go on at 4PM sharp, so be advised.

Be advised - there are also plans for The Purkinje Shift to play a few songs immediately following the Lumens set at 4PM, so you might want to arrange your schedule accordingly for this one.
Posted by James Joyce at 1:37 PM 3 comments: 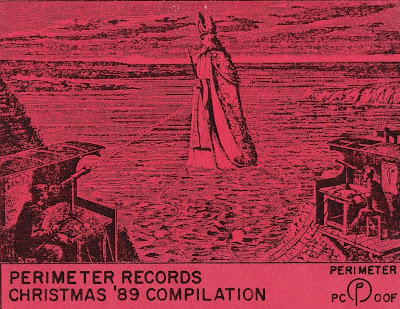 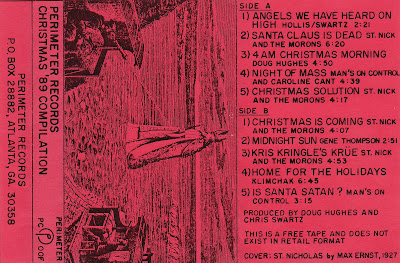 Son of the Flagpole Christmas Compilation 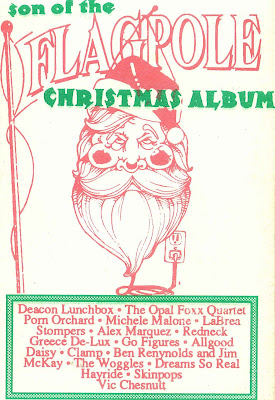 Here is the download: Son of the Flagpole Christmas Compilation 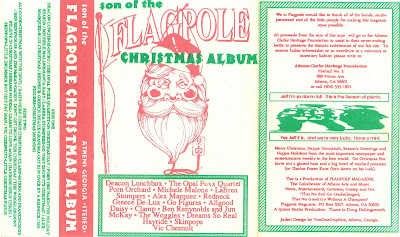 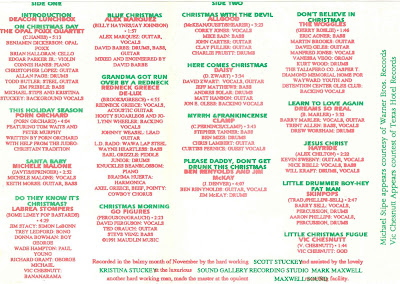 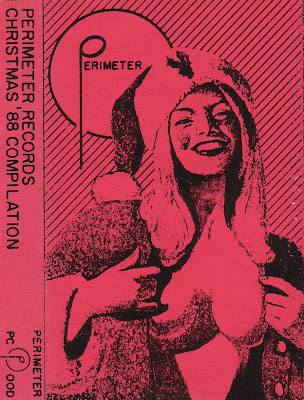 This is the second Christmas tape compilation put out by Perimeter Records in 1988. Some classic experimental rock and ambient music with a Christmas theme, late night WREK stuff. Great background music to put on while decorating the tree. Thanks again to Doug Hughes (Broken Symmetry, Outer Loop Records, Tenth To The Moon) for remastering and providing all of these recordings. 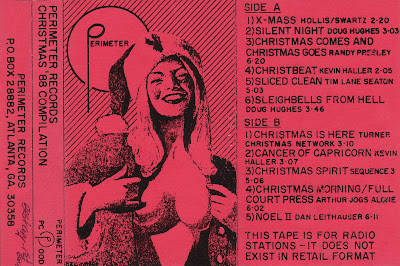 Posted by James Joyce at 3:20 PM No comments: 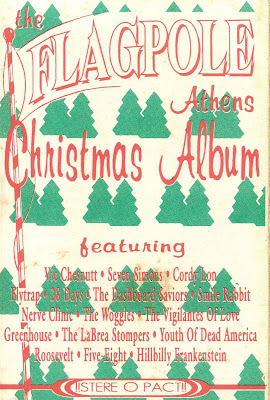 What a lineup for this first Flagpole Christmas compilation! All the classic Athens bands of 1990 are represented (especially on Side Two) - Vic Chesnutt, Roosevelt, Five-Eight, Hillbilly Frankenstein, The Woggles, The Vigilantes of Love, The LaBrea Stompers. Every band on here except Five-Eight, Vic Chesnutt and The Woggles are long gone, but these three are still playing regularly and even released new albums this year. Local Christmas compilations can be patchy in quality, but this one is pretty solid all the way through, and all the songs seem to have been taken seriously by the artists to make a solid listen all the way through. My personal favorite on this tape is probably the LaBrea Stompers cover of "You're a Mean One, Mr. Grinch", as it is perfect material for Jim Stacy's voice and personal disposition. I know it still feels too early to get in the spirit of the season, but I have too many of these compilations to get through!

Here is the complete artwork (click on the image to enlarge): 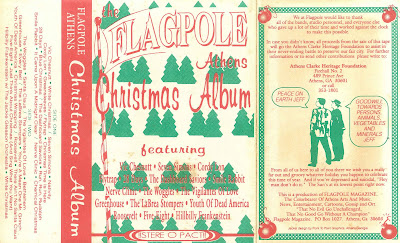 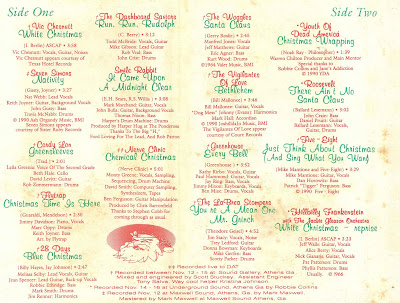