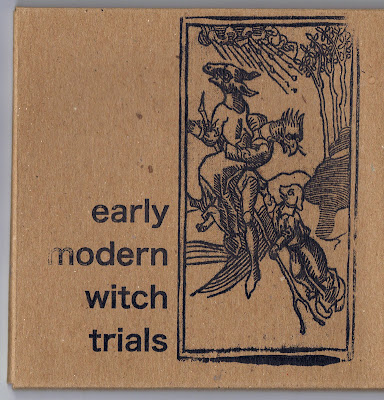 Before there was Judi Chicago, there was Early Modern Witch Trials. Ben Coleman and Travis Thatcher, the two main creative forces behind JC, channelled their love of sixties psych, seventies prog and krautrock, and some Monks thrown in for good measure and formed EMWT. What is interesting about EMWT is the choice of instruments for the members: Travis exclusively played sax (he is known far and wide as a synth guru), Ben played bass (once again, known for electronics and guitar in Judi Chicago). They also recruited Mick Winters to play Farfisa organ (previously a bassplayer in Black Cougar Shock Unit out of Gainesville/Atlanta), and Blake Helton on drums (his usual instrument, but normally he is a very jazz-style drummer and this is definitely a more caveman/visceral plane of existence for him). According to Travis, Ben and Mick formed the band together, then got Blake involved through a Craigslist posting or some similar resource, and then added Travis to make sax and noise only after they had been together for six to eight months. It's amazing that they found someone as like-minded and musically gifted as Blake Helton through Craigslist, quite a diamond in the rough.

I am not sure where the name came from, but it always reminded me of the first album by the Fall "Live at the Witch Trials". It does have a kind of psych-tinge to it, but also something that might be played on the Stonehenge radio show. My old band Sonn Av Krusher was supposed to play with them, but they imploded before we had a chance and instead played with Travis and Blake's other musical outlet, Recompas. So Travis and Ben went on to focus on Judi Chicago (recruiting me to play drums with them whenever possible) and now Ben doing his solo work as Kid Pyramid, Blake continued on in Recompas with Travis as well as playing in many other projects, and Mick is now playing in an MC5-style rock band called Charges. At least EMWT recorded a full-length CD/demo, which I am including here for everyone to enjoy. Furthermore, Travis sent me a link to a live show here.

Here is a picture of them playing at the 11:11 Teahouse (now Sauced). 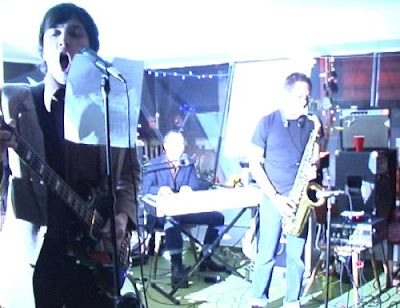 And a bio from their old Myspace page:
Early Modern Witch Trials formed in the Fall of 2006, in Atlanta, GA, to explore the sonic territory blazed by the likes of The Monks, Suicide and the bands of the American Garage Rock / Psych scene..... A more improvisational direction, drawing upon elements of the English Progressive and Space Rock Movements (Van Der Graaf Generator, Hawkwind), the Canterbury scene (Soft Machine, Gong, Caravan) and the Avant-Rock of Early 70's Europe (Faust, Amon Duul, Can, Ash Ra Tempel), emerged from extensive rehearsal sessions and the addition of new members. .... By January of 2007, the band's core sound was complete, featuring winds, strings, keys & percussion, without a six string guitar in earshot. .... The quartet made its live debut in February 2007, will continue to perform live throughout the Spring and Summer and is currently recording for releases later in the season. .. .
And the back cover of the demo CD: 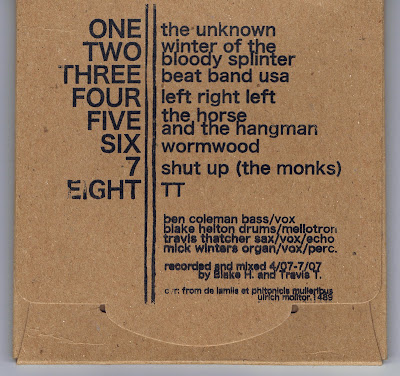