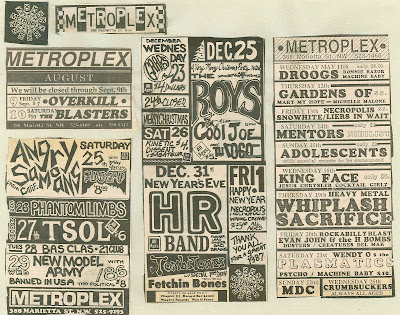 Joe Myers (Inkwell, Re/Model, Black Venus) recently loaned me his flyer collection, which is really a scrapbook of classic Atlanta shows and bands long gone. Of course you can click on any of these pages to get a full-size view. When Joe put together these scrapbooks, he would only cutout the lineups for each show, and not the date or venue, but I will try to fill in the blanks wherever possible. The above page was from the Metroplex and included several great shows from the 1988-1992 era, including TSOL, Kingface, MDC, HR, Plasmatics, Angry Samoans, The Undead, The Blasters, Gardens Of, etc. 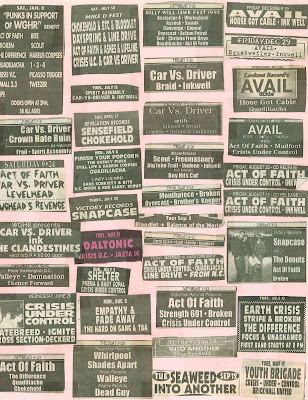 Here is a page of shows from the Somber Reptile and Wreck Room, circa 1993-1994. We have the WGHR and Mike D fests, plenty of Act of Faith, Car vs. Driver, Crisis Under Control, Inkwell, Quadiliacha, etc. shows and many of the first Avail shows in Atlanta. 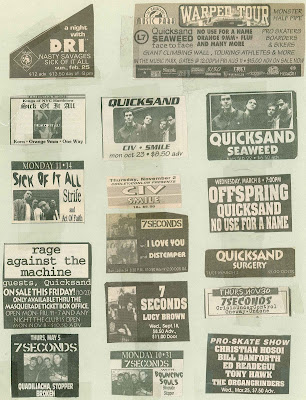 The Masquerade has hosted more amazing shows overall than any other Atlanta venue. Many of the pages above and below highlight their golden era from the early 1990's. This page includes several Quicksand/Seaweed shows, 7 Seconds, the first Warped Tour (hosted in the Masquerade music park), DRI, and the skate show that I went to in 1991 with Bill Danforth, Christian Hosoi and Tony Hawk where they built a halfpipe and literally hosted a skate demo in Heaven. I went with my skate posse, and my friend Matt Kew got Bill Danforth's wristband, which he bit off to give to him and also heard Bill utter the infamous line "it's not a good session unless you're bleeding", or something to that effect. 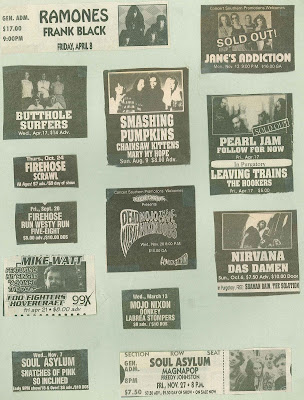 Just another listing of the varied shows from early 1990's Masquerade, including the Nirvana/Das Damen show on October 6, 1991, Frank Black opening for The Ramones in 1994, Foo Fighters opening up for Mike Watt in 1995. 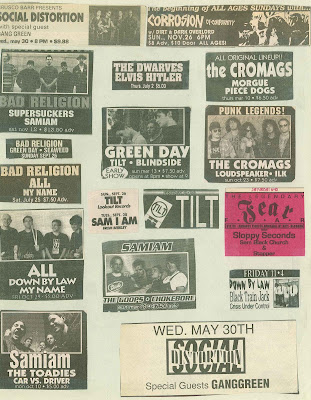 More Masquerade flyers, and some Roxy and possibly Center Stage rolled in. Here is the Car vs. Driver show with Samiam and The Toadies at the Masquerade in 1994 (my last show playing there until 2009), Corrosion Of Conformity with Dirt and Dark Overlord in 1989, Bad Religion with Green Day and Seaweed in 1993. 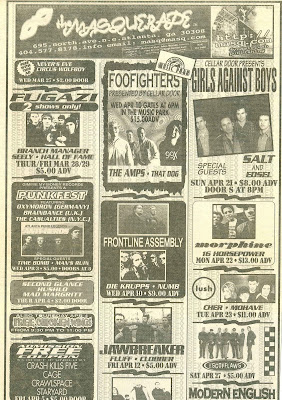 Just a general Masquerade flyer from March/April 1996, including Fugazi with Seely, "Dear You" era Jawbreaker, Girls vs. Boys, etc. 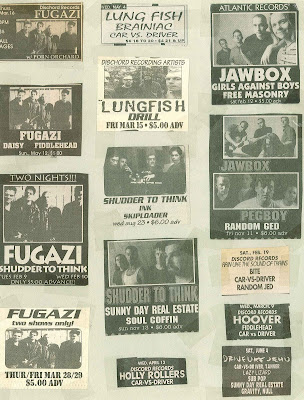 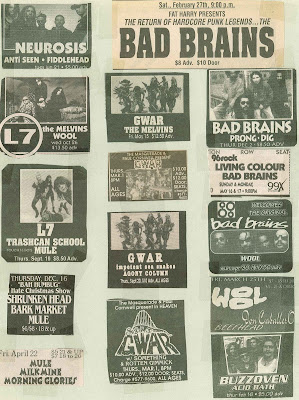 The only show I saw on this page was the Gwar/Melvins show in 1992. Some other interesting shows by Mule, Bad Brains, and the Neurosis/Antiseen/Fiddlehead show in 1994 must have been something. 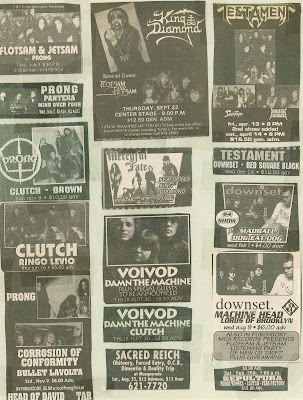 Now we have the metal page. Mercyful Fate, COC, Voivod, Testament with Nuclear Assult in 1990. Classics. 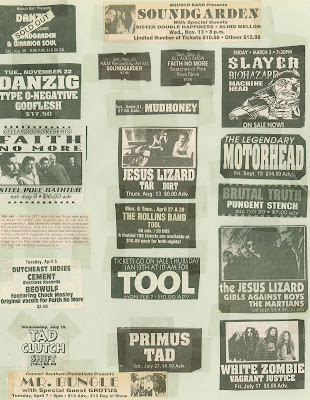 More metal, noise rock, etc. from the Masquerade and Roxy. The Jesus Lizard/Tar/Dirt show from August 13, 1992 as well as the Jesus Lizard/Girls vs. Boys/Martians show from September 24, 1994 were key early 90's events. 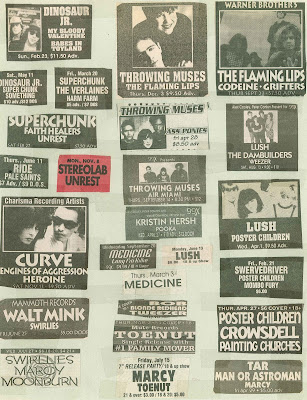 More indie rock from the Masquerade. I went to the Dinosaur Jr./My Bloody Valentine/Babes In Toyland show on February 23, 1992 and it blew my head off. The Superchunk/Faith Healers/Unrest show from February 27, 1993 was the first time I saw Unrest, although my first time seeing Superchunk was when they played with Mudhoney, which I cannot find here. The Stereolab/Unrest show from the Somber Reptile on November 8, 1993 is listed here, which was amazing. I remember Unrest going into the crowd to wait for their encore as there was no backstage. So many great shows. 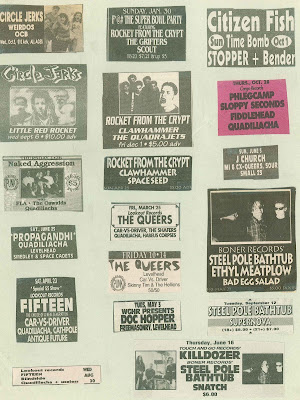 More punk shows from the early 90's, including Rocket from the Crypt with Clawhammer and Scout from January 30, 1994 (I had no idea Scout ever opened for RFTC). The Queers with Car vs. Driver, Levelhead and Habeas Corpses at the Somber Reptile on March 25, 1994 where Steve Wishart vomited behind his amp. 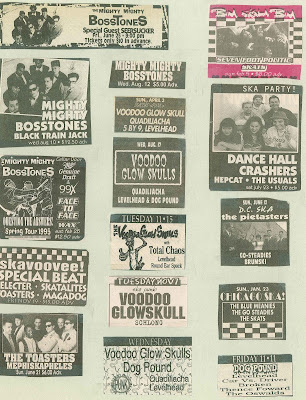 Of course you have to include the ska page. The Bosstones with Seersucker at Center Stage on June 25, 1993 was the only time I got to see Seersucker - strange lineup. There are some shows with local ska bands the Skats, The Go-Steadys, Brumski, I'll even count Seven Foot Politic in there. 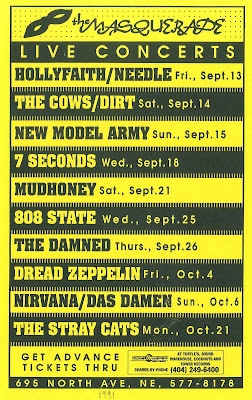 Lastly, here is a monthly calendar for the Masquerade in September to October 1991, including the Mudhoney show, which I believe was the time Superchunk and Gas Huffer opened for them, Dirt opening for The Cows. What a collection of shows.
Posted by James Joyce at 1:33 PM 36 comments: 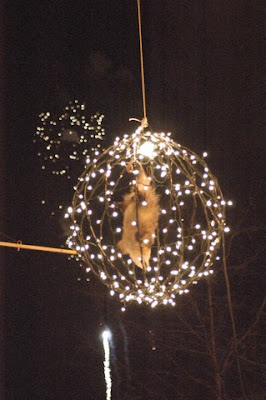 Hope you all had a good New Years - I spent the entire time in a manner reminiscent of my favorite Pere Ubu quote:

"Rock music is mostly about moving big black boxes from one side of town to the other in the back of your car."

So I took some time off from the blog, but I'm just about ready to start posting again. As usual, there is a huge backlog of material that I am trying to get through, but it keeps piling up. I sincerely apologize to Kim Chee, Gray Kiser and Kip Thomas in for how long I have been holding onto your stuff, I will try to get everything back to you as soon as I can.
Unfortunately I was not able to finish all of the Perimeter Records/Outer Loop/Flagpole Christmas compilation posts in time for Christmas, but instead of writing about them now, I will save the remaining posts for December 2010 when the spirit will be back upon us. However, I have uploaded all of the music, which you can find here:
Perimeter Records/Outer Loop Christmas Compilations
Flagpole Christmas Compilations
If you remember the Bliss post I did awhile back, Henry Owings sent me a live recording of a reunion show they did in Athens back in 1994:
Bliss Live at the Atomic Music Hall
If there was a show in Atlanta or Athens back in the nineties, chances are he has a recording of it somewhere in his dark tower of DATs. However, it would probably take thousands of man hours to organize and transfer everything to CD/MP3.
Drew Rydberg sent me a recording of the No Walls Live at WREK session, probably from 1991 or 1992, which is excellent and includes some interesting free jazz improvisations between songs. Here are his notes - "First off, credit where credit is due.....this Live @ WREK show was originally recorded directly to cassette from the radio broadcast by my friend Randy Castello. He loaned me that tape many years ago, and at the time I was working at a studio in Nashville, so I was able to clean up/re-master the recording somewhat. It seems like the band didn't have enough material to fill out the show, so there are a few improvisations sprinkled in between the normal songs (I'm not complaining). There was some chaff/banter that was cut out here and there for the sake of making a listenable CD, but all the good stuff is there."
I have included it on the original post, but you can also download it here: No Walls Live at WREK
The Thomas Peake memorial show at Eyedrum on December 20th was amazing, and I have posted some of my recordings here:
Lumens Set
Purkinje Shift Set
Seventy Spacebird Set Edit
Lumens is the new band with Gary and Ben from The Purkinje Shift along with Ben Lukens from The hal al Shedad. The Purkinje Shift need no introduction, but I am currently working on a Purkinje Shift post for this blog. Seventy Spacebird played after everyone had left, but it was a good time and Mathis Hunter edited best parts of the set into one concise track.
Lastly, The hal al Shedad plan to play a one-time reunion show on March 27, 2010 at the Drunken Unicorn in Atlanta as a benefit for our friend Gavin Frederick. You may know that Gavin got a nasty bacterial infection right before Thanksgiving, and had to be hospitalized for over a week. He does have a health plan, however he had to take out essentially a car loan to pay for the deductible. So this is our way of helping him out, and saying thanks for all the support he has given our town and our music over the years. Rizzudo will also play the show, as well as hopefully Some Soviet Station, although I need Jesse Smith to confirm this. Lee - has Jesse talked to you about this?
Posted by James Joyce at 12:29 PM 6 comments: