Here is the download: Ostinato Album
After Scout dissolved in early 1996, I remember the guitarist Erv Lockett (Scout, Motherfucking Tourettes, Crusher Destroyer, Karate Bear Fighter, Volcanism, etc.) started doing solo guitar shows, and eventually added his previous bandmate Scott Wishart on drums and calling themselves Ostinato Grove. Sometime after this, they added a bassplayer named Dave Knox and then they shortened the name to Ostinato. I don't think they had any official releases, but they did have this CDR floating around in the early 2000s, which is quite impressive. I always had a soft spot for Scout, but this album really swings for the fences. Kind of like taking Scout and developing their sound to another level, more focused and a tighter unit. I would really like a second guitar in there, but also it keeps things a little more coherent since Erv is such a busy player.

Scott always bounced around the Clemson/Atlanta/Charlotte area, but eventually he settled in Charlotte and opened Lunchbox Records, so you can go bug him at work whenever you are in the area. I will see Erv every once in awhile in the Atlanta area, but I don't know what David is doing these days. There was talk that they might reform as Scout but in the Ostinato lineup, so we'll see what happens with that. I would probably drive up to Charlotte to witness that one in action.
Posted by James Joyce at 4:03 AM 1 comment: 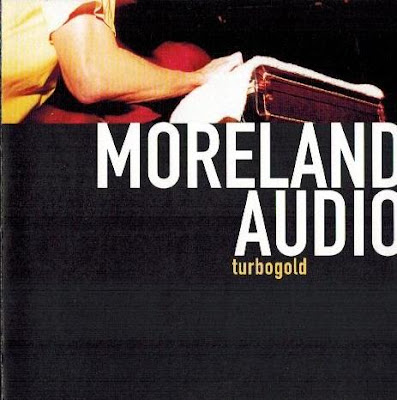 Since the Purkinje Shift has been up and at 'em as of late, playing regular shows and writing new music with the addition of master drummer Lee Corum (Chapterhall, TSDOSD, Mock Heroic, Some Soviet Station, Copa Vance, Home of the Wildcats, Lay Down Mains, Gold Standard, etc.), so I thought the time was ripe to upload the Turbogold album by Moreland Audio. You can check out my previous Purkinje Shift post here, as they have been creating quite a legacy for themselves, soon to be assuming their status as the "Drivin' n' Cryin' of math-rock".

Gary Flom and Ben Davis love to play music together. I'm not sure exactly how they became musical BFF's, but starting with The Purkinje Shift, moving into Moreland Audio, then Home of the Wildcats, then a gap while Gary played in The Forever War, but then together again with Ben Lukens in Lumens, and now reunited as PKS. But back in the year 2000, things were not so certain. I'm not sure of the exact chain of events, but Scott Robbins moved on in his life/career/geographic location and left the Gary/Ben team without a drummer. Enter Adam Overton, a guy from Ben Davis' real musicians' network (and not one of us punkers), bringing a more subtled feel compared to the stark metronomic beats provided by Scott. Additionally, Ben and Gary mixed it up by adding some baritone and lapsteel guitar work, respectively, and really stretched it out on this record. Overall, it is a more abstract and discordant band, but also more rocking and visceral. Of course they were still a fully-instrumental endeavor, as it was meant to be from ever since. They did it for 2-3 years, and then wrapped it up in2003, releasing only this album and a song on the String Theory compilation.

Here is the rest of the artwork: 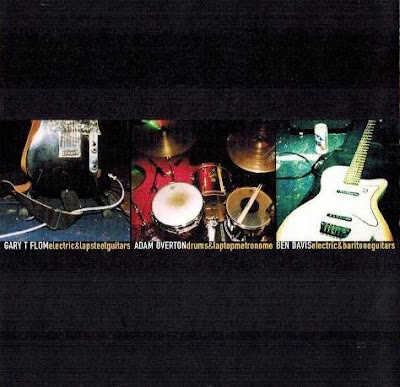 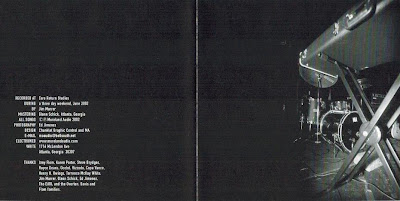 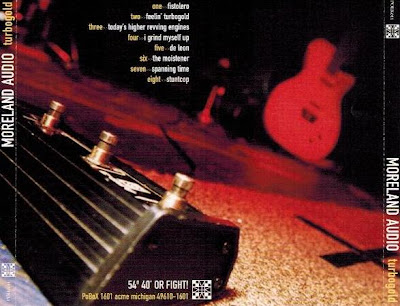