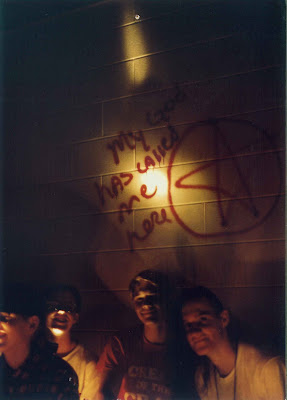 And So It Begins...
Back in 1989 or 1990, Jason Albert, Miles Peterken and Chad Wiener were building some dirt jumps for their BMX bikes in an empty lot at the back entrance of the Horseshoe Bend (a neighborhood in the Roswell suburb of Atlanta). The shovel, hoes, etc. they were using to build the jumps were broken in half along the shaft, so they had to bend over and squat on the ground to shovel the dirt and make the jumps and whatnot. After some time, Landon Holt walked up on Miles, Chad, and Jason digging with the crappy tools and said,"Hey guys! Did you steal those from some midget farmers?" You have to picture it at Landon volume and with spit flying out of his mouth and foam forming at the corners. Anyhow, Jason Albert had just started playing bass, and he was playing with his friend Chad Wiener, who had just started playing guitar (no drummer yet). At their next “practice”, Jason had an idea for the name of their new band, which was “Midget Farmers”. This fit in perfectly with one of their favorite bands at the time and certainly an inspiration - The Dead Milkmen.
The Midget Farmers started out with just Chad Wiener (guitar) and Jason Albert (bass). 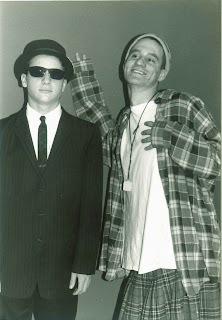 Our fearless leader, Chad Wiener (with Jason Griset of the Go Steadys). 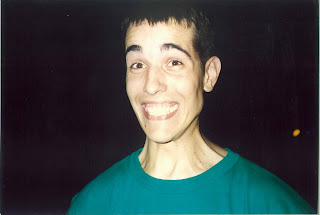 Then they got Mike (Matt) Eckert to play drums, although he didn't have a drumset, so he just played a snare drum and hit his drum case to make the bass drum sound. Eventually he got a full drumset, and made a Midget Farmer logo on the front head in a Teenage Mutant Ninja Turtles design with markers. A little after that time, I joined the band as a lead vocalist. I have a practice tape from that time which is completely hilarious, but I can't seem to find it at the moment. In around 1991, Jason Albert moved to Greenville, SC so we got Brian Lysne to replace him on bass. We played a high school talent show around that time and Eric Fickes really wanted to play, so he joined as a second bass player and I also switched to drums as Mike was becoming unreliable and not into the general craziness we were throwing down. 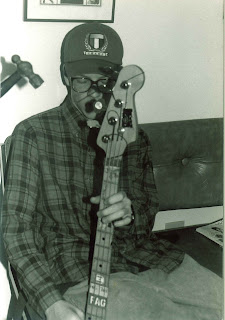 Eric Fickes on Bass - Check out the FAG sticker on the fretboard.

This is when we recorded the "Happy As A Bastard On Father's Day" 7" (we were in 11th grade) and "America's Place To Waste Your Life" tape (we were in 12th grade), as well as taking the band photo seen above. By the way, this picture was taken at the old Roswell High School after it had closed down and become abandoned. We snuck in there one night with candles and flashlights and found the "My God Has Called Me Here" graffiti in one of the inner rooms. Later that night we went to Krispy Kreme, as was our weekend ritual. These would be considered the "Salad Days" of the Midget Farmers, but soon Brian left to play primarily in the Go Steadys as well as his rockabilly band The Swingtips with Jeff Arnold, and Eric started taking over lead vocal duties for most of the songs. That was the final phase of the band, as a power trio with Chad Wiener on Guitar, Eric Fickes on Bass and myself on Drums. We recorded the "Weblo" 7" soon after starting college and floundered for a while before eventually breaking up. At the time, I was playing in the Go Steadys as well as Car Vs. Driver, and I was driving from Athens to Atlanta every weekend (and sometimes during the week) to practice in three bands as well as play whatever shows that were booked. Burnout was inevitable, and as Car Vs. Driver broke up with Jon Rothman moving to Montana, I left all the other bands and joined up with the hal al Shedad exclusively.

Now here’s the story of our first show. It might actually have not been our first show, but it was definitely one of the first. We played a party at Maya Geebis’ house (I can’t really remember how to spell her name), which was basically her and her girlfriends – who incidentally later became our girlfriends. Chad Wiener was the only one who was sixteen, and he drove his family van at the time, but it still took 2 or 3 trips to get all the equipment over to Maya’s house. These girls had first discovered the first Fugazi EP, so they played it constantly at the party. Actually, they just played the song “Waiting Room” over and over. They loved the hell out of that song. Once the song would end, they would immediately rewind the tape and listen to it again (and again, and again). I remember them sitting in a circle singing the song all together while we set up "I don't want the news!!! etc.". It was hard to turn off the damn tape so we could play some of our own songs. After we would play for a little while, they would start the tape up again, right on that bass line – da da dum da da di da dum … repeat. When you think about it, all it took was a tape of a Fugazi song to upstage us at that time. This went down in history as the "never-ending Waiting Room" show.

Here’s another early show story. We played at Jen Erts’ basement down the street in my neighborhood. I think Chad was dating Jen at the time, and her older brother was friends with a band who would also play basement shows. At that time it was the guys in their band watching us play, and us watching their band play, as most shows were back then. The were basically a funk metal band, which was like so many bands of that time, but they played a great cover of one of the Waffle House songs you can find on their jukeboxes. They might have played a few Waffle House songs. Of course it happened to be their best song. For most of the bands at that level, the cover song was their best song. Coincidentally, Midget Farmers did a mean version of the A-Team theme, which might have been our best song and what people remember us for.

I will have plenty of more stories and pictures/flyers to post, but until then here are some recordings to tide you over:

Here is our Live at WREK session on December 20, 1994 - our last recorded output. There are some of our last songs on here that were never properly recorded in a studio, so it's a nice document of the late-era MF sound. As you can tell, it also coincided with late-era Car Vs. Driver sound, or at least the drums. Jason Albert (our first bass player) does the introduction to the band. Also dig Eric's random shout outs to everyone and anyone listening at any time.

Here is the recording in MP3 format as well as M4A format for you ITunes losers:
Midget Farmers Live at WREK December 20, 1994

Here is a classic recording of the Midget Farmers practicing in my basement around 1992. This is the 2-bass player lineup with myself on drums. It is interesting how different practice was back then, especially our in-between song noise. Extra bonus is a Chad Wiener solo demo of "What It's Like to Be Me" later appearing on the Weblo 7". Chad was the primary music and lyric writer for the Midget Farmers. He would record the song playing guitar and signing in his bedroom on a little tape recorder, and then give me the song to write a drum part and Eric to learn the lyrics/write bass parts. I'm glad I still have an example of these demos from Chad. The practice has some choice cuts, such as Grey (with one of my favorite ending lyrics of all time "everybody carries a knife"), Shortcut to George's (the first song Midget Farmers ever wrote), and I Wanna Rock n' Roll (an early MF favorite).

Here is the recording in MP3 format and in M4A format for you Itunes nerds: