The Divine Phantom and The Love God Murder - Live at the EARL January 31, 2002 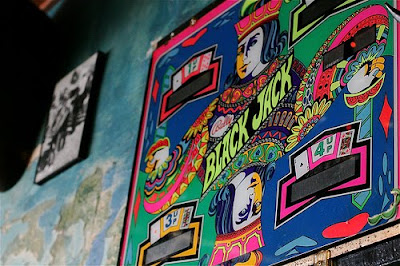 Here is the download: The Divine Phantom and The Love God Murder

Here is a show I recorded at the EARL on my then new mini-disc player back in January 2002. The Divine Phantom was the solo project of Craig Lee Dempsey (The Forty-Two, Aslund Constant, Lowboy, Good Friday Experiment, At the Price of the Union, Thoroughbred, etc.), which was his take on the solo Americana stuff years before it became the cool thing to do. Spooky stuff, I wish he kept at it.

The Love God Murder was the original name for Joseph Plunkett’s band, The Weight. This incarnation featured Marlow Sanchez (All Night Drug Prowling Wolves, Rent Boys, Swing Riot, etc.) on bass guitar, Susan Rose from Portrait on violin, Craig Dempsey on lead guitar, and I can’t remember who was on drums. Many people have played in Joseph Plunkett’s band over the years, including even Kenn Two Four if you can believe it. Soon after this, Joseph changed band names to The Weight, moved to Athens for awhile, and then relocated to Brooklyn and has enjoyed great success with his team up there. In the past few months, he came back to Atlanta to record a new album at the Living Room Studio with Ed Rawls and Justin McNeight at the controls, and got married. Congratulations Joseph, hope you enjoy this old recording I dug up.
Posted by James Joyce at 11:37 AM 6 comments:

The Lids - Something To Do 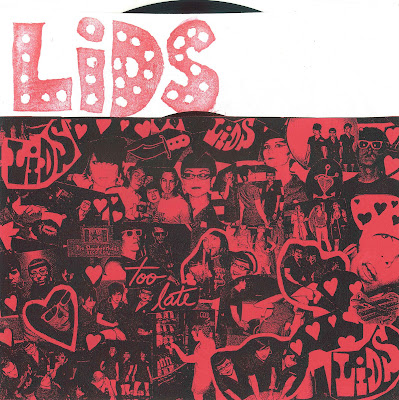 Much has been said about the tragic passing of Bobby Ubangi earlier this year, so I thought I would post one of his first singles here. The Lids were around in the early part of this decade, consisting of Bobby Ubangi on guitar/vocals (Gaye Blades, Bobby and the Soft Spots), Dave Rahn on drums (Carbonas, Gentleman Jesse and His Men, Baby Shakes, etc.), and three female singers including Valery Lovely, Alix Brown and Sara Harper. From this band I only previously knew Valery from her days booking shows at the 485 Robinson house in Grant Park, which hosted many great shows back in the 1997-1998 era, and of course through her sibling Lewis Lovely, soundman extordinaire and bassist for Scout. She is also a great photographer and is likely sitting on an amazing collection of photos and videos from the past twenty years. Maybe someone can convince her to release a book of her photographs, I know I would be interested.

This is the single for “Fool For You”, “Too Late” and “Something To Do” released on Die Slaughterhaus records, DSH02 to be exact. I saw them play once with The Carbonas and The Tyrades at Dottie’s around 2002, or maybe it was Lenny’s by that time. It was a great show – all the bands brought it, especially the Tyrades. I was most interested in seeing them, as I was high school friends with the bass player Robert McAdams and never got to see him play in a band before. It was also great to see Francis Jensen (The Forty-Two, Chapman Park) play drums again. Enjoy the single.
Posted by James Joyce at 1:01 PM 3 comments:


Yes, that is my daughter in the video, attacking Atlanta like she does my record room.

Judi Chicago will be playing with Social Studies (aka Chris Devoe and Zano) and many others on Saturday night on the roof of the Glenn Hotel to commemorate the release of the Fun City video and 7”. It should be a great evening, and it’s free, so what have you got to lose? Hope to see you there.

Here are some other videos of Judi in a live performance setting: 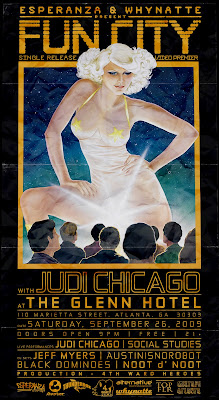 Posted by James Joyce at 2:23 PM No comments:

Vertex T. - This Is Not A Test 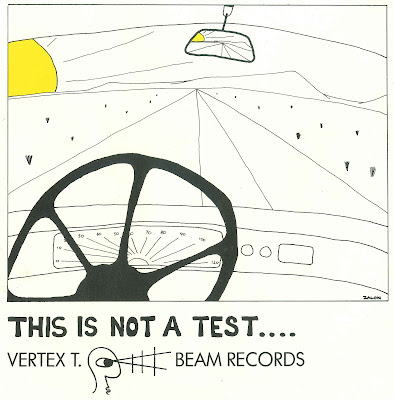 Here is the download: Vertex T. - This Is Not A Test

This is a little bit of a different post for me, as I have no idea what this single is all about and cannot give you any further information apart from the music and what was included in the packaging. I tried to look up something about Vertex T. online, but could only find someone on ebay selling this single for $15 and also no additional information listed. The seller mentions in the post that the single has never been played, which can be a good thing or a red flag depending on your perspective and the record in question.

Adam "Bomb" DeVore recommended this single from the archives of the Georgia Music Show, which he hosts on Wednesday nights from 6-8 PM on Album 88. I was able to visit their studio a few months ago and borrow several records and CDs to use for posts on this blog, which will delve into different scenes and more uncharted territory over the next few months. This is the oldest piece of music they have in their local stacks, recorded in the Summer of 1985 at the Pillowtex Warehouse in Atlanta and the Back Street Juveniles' Studio in Macon, which I have also never heard of. It definitely has that mid-80's obscure novelty music feel, maybe not the strangest music you are going to find on this blog, but certainly out there. Once again, if anyone knows anything about Vertex T., please comment. 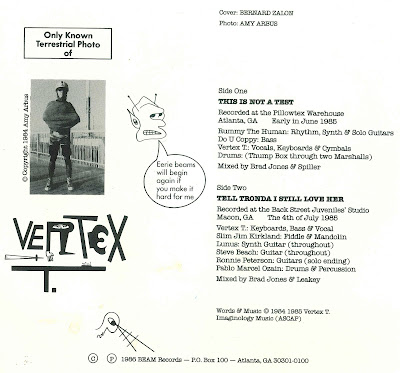 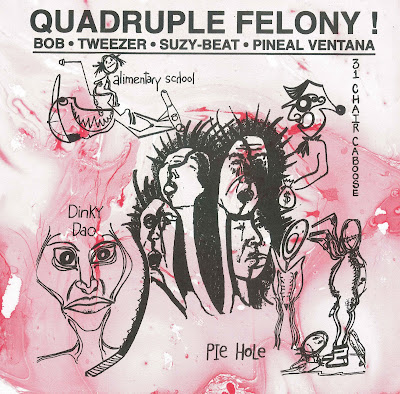 I can remember coming across this single in every record store whenever flipping through the 7”s, and it eventually took on an iconic status for me as a part of this scene that existed in Atlanta from the early to mid nineties. These bands were the local music elders from where I stood, even though they were probably only three to five years older than us at the time, but our circles rarely crossed. While we were playing all ages venues like the Somber Reptile or the Liquid Bean, they were playing more “adult” clubs like the Point and later Dottie’s, and many others that I can’t remember at the moment. There are many stories to be told, and I'm starting to get in touch with some of the people from this scene (e.g. Kim from Pineal Ventana, Rick from Whiskey Dick/Howling Fantods, etc.). Hopefully they can chime in on these releases, and maybe even do some guest posts someday.

Kim from Pineal Ventana forwarded me a link to Amy Potter's history of Half Baked Records, which includes this paragraph about the Quadruple Felony single. "Around the fall of '94, BOB, Pineal Ventana, Tweezer, and Suzybeat all approached me about doing a theme record together. I said cool! We would get together at the El Azteca Mexican Restaurant on Ponce de Leon (affectionately nicknamed the "Punk-rock ass-kicker" for their incredibly strong margaritas) and talk about the record. We were a motley crowd, infamously known by the wait staff. We would flip tortillas across the table at each other (with salsa on them). This would make a huge mess, annoying the wait staff and the customers. The first couple of meetings, we got absolutely nothing done but drunkenness. The taking of the promotional photos was quite fun. We took a ton of us in front of the El Azteca when an ambulance had just pulled up in front. We all could never agree on a theme or artwork. In fact, I think some of the bands are still pissed at one another because of the artwork. It took until March of '95 to actually get a record pressed. The theme was about four different crimes: a bank robbery (Suzybeat), serial murder (Tweezer), child molestation (Pineal Ventana), and Vietnam War crimes (BOB). The release party was held for the 4-song 7-inch entitled Quadruple Felonyat Dottie's on March 8, 1995. We then booked a 2-day tour to North Carolina with everyone except Suzybeat participating. Our first stop was Wilmington, NC at the Bourgeois Pig. Pineal Ventana had this huge bag of popcorn and threw it on BOB during their set. It was hilarious. Our next stop was the Turtle Club in Greensboro. The club did little or no publicity and plus it was spring break - no one showed. We didn't let that bring us down. We had our own show. Everyone was drunker than hell. We found a Barney doll in the parking lot, ripped its insides and voice box out, and would wear it on our heads during the show. The voice box was also found singing in many songs. Travis of Pineal Ventana also subbed in for Timmy of Tweezer during Tweezer's set and no one noticed. It was one of the funniest times that I can remember about my label. A few weeks later I went with BOB on tour to Florida, New Orleans and Texas. I loved touring with my bands; it was something I didn't get to do that much since I had a full time job."

For this single, we have another song by BOB represented, as well as some nice contributions from Suzy-Beat, Pineal Ventana and Tweezer. The Tweezer song here may be my favorite of theirs as a band, but I will be posting more from them soon. Pineal Ventana were legendary from this time, truly a very vital and exciting Atlanta band. I would like to get Kim to help me with a Pineal Ventana post someday, but I haven't had any luck yet. Until then, there is plenty of footage on Youtube to watch. Of course there will be more from Tweezer in the future, who have a lot to share and were definitely underrated from my perspective, but I would especially like to get more by The Suzy-Beat. I remember them having at least a single out back in the day, but if anyone has any recordings by them, please send them my way.

Here is back cover of the single, including the classic picture of everyone at El Azteca on Ponce. Thanks to Half Baked Records for another great release. 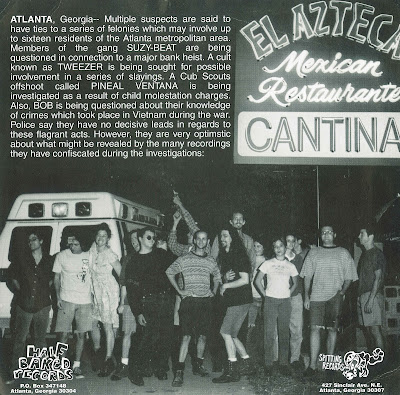