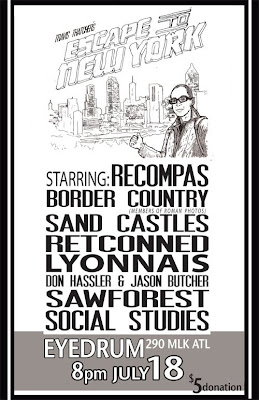 Travis Thatcher (Judi Chicago, Recompas, Go Back To Europe) will be saying goodbye to Atlanta in a big electro love-in at Eyedrum on Sunday, July 18. It is very sad to see him go, but New York is really the place to be for a guy so amazingly talented. On the bill is his band Recompas, which is basically a free-for-all for everyone in attendance, Retconned, Social Studies, Border Country (Roman Photos dudes), Lyonnais, Sand Castles, and Sawforest. There will also be cook-outs, customized vehicles and electronics, beer, soldering, and everything else Travis holds dear. I want to wish him all the best of luck and success in the big city, and I will be here, listening from my window for The Voice of Saturn beacon. 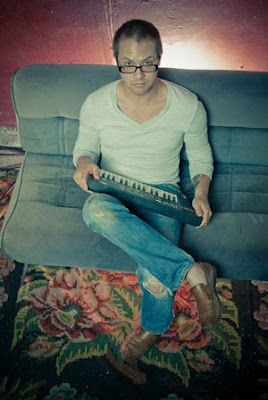 Posted by James Joyce at 9:48 AM No comments:

Paper Lions / I Am The World Trade Center Split 12" 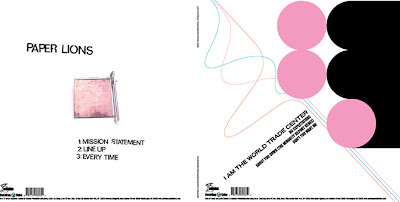 Here is the IATWTC side: I Am The World Trade Center split with Paper Lions

Also, you can always find the first Paper Lions album here: Paper Lions - The Symptom And The Sick

It's a rare but amazing thing when you are into a band that broke up a long time ago, and somehow years later you find a release by the artist you previously never knew existed. I can be a little out of the loop sometimes, but when I was in CD Alley in Chapel Hill last month, I found this Paper Lions split 12" with Athens' I Am The World Trade Center on Doubling Cube Records in their used bin. I never knew Paper Lions released anything other than their first album, and some of their best songs as well! They were definitely a band on an exponential curve, it was a shame they had to implode so early. This 12" has them refining their sound into a proper postpunk dance/disco outfit, much like "Solid Gold" era Gang of Four or Magazine but completely modern and ripe for a breakthrough. Instead they broke up and went their separate ways - Jesse Smith into Carbonas/Gentleman Jesse, etc., everyone else going into various projects and duties including Teenage Meth Lab, Chris playing bass for Maserati, and Josh playing drums with Elf Power. I have always liked the bands associated with this crew, whether it be The Kossabone Red, Some Soviet Station, At the Price of the Union, or any of their current bands, they have always put out great music.

I Am The World Trade Center has plenty of history to go around, and I was always an outsider to that scene in Athens so I am not going to expound on them too much. I always liked their version of Human League's "Don't You Want Me", which was always a party starter at their shows, so I'm glad they recorded it for this split. You can find Dan Geller from IATWTC playing in Ruby Isle and running the re-launched Kindercore Records, one of the great local labels of the past 20 years.

Here is what Doubling Cube had to say about the release:

I am the World Trade Center (IATWTC) and the Paper Lions team up for an exclusive vinyl split 12" EP released jointly by Echelon Productions and Doubling Cube Records. IATWTC kicks off the A side with "No Expectations", a track pulled from their fulll length, The Cover Up, and which signals to their maturing as a band, though still rooted in the beat-and-hook pop electronica of their previous efforts.

Following are a pair of covers; a sublime Minority Report remix of the IATWTC’s rendition of the Stone Roses’ "Shoot You Down", and an interpretation of Human League’s "Don’t You Want Me", which has long been a favorite at their shows and now finally appears on record.

Over the last few years, IATWTC has traveled the globe, spreading their message of dance music for smart people — a concept scarce in these days of progressive house and hand-me-down rave culture. They’ve found themselves in the company of other smart, young bands making this emotionally based electronica like The Postal Service and Her Space Holiday. IATWTC’s concept has also always included a healthy dose of romance as well, which goes straight back to their heroes in bands like Berlin and Blondie, where the onstage (and on-tape) chemistry of alternately warring and loving couples was frequently half the attraction.

On the flip side, with production by Josh McKay of the critically acclaimed band Macha, the Paper Lions burst out with their set of tunes, the explosive "Mission Statement", "Line-Up", and "Every Time", which features IATWTC’s Amy Dykes on lead vocals and hearkens back to the days of early Blondie.

When Paper Lions sat down to begin writing new material in the Fall of 2003, they found that their earlier inspirations of 90’s era post-rock had been shaken off - instead they opted for a continuation of the ideas laid down by early post-punk bands like Wire, Killing Joke, and Public Image Ltd... Paper Lions incorporated these influences into their already diverse songwriting abilities. The results of the recordings with Josh McKay were astonishing and a huge step forward for the band. These songs envelop the listener with urgency and tension, much like the first time you placed a Rough Trade Records release on your turntable.
Posted by James Joyce at 10:05 AM 6 comments: 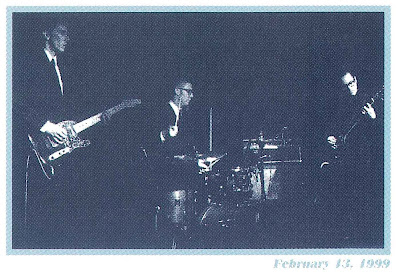 Here is the track breakdown:
1-2 from the "Nine Twelve Seven" single
3-8 from "Nickel Waves and Carbon Stars" album
9-14 from "Five for the Road and One for the Ditch" album

Also, here is their set from the Thomas Peake Memorial show: Purkinje Shift at Eyedrum 2009-12-20

The Purkinje Shift: Benjamin Davis, Gary T. Flom and Scott H. Robbins - show them some respect. They existed between 1996 and 2000, they had two guitars and no bass (although I always thought of Ben being the rhythm/bass element and Gary being the lead guitarist of the band), they toured with Man or Astroman?, they played in suits, they didn't stop between their songs, and they were one of the tightest live bands I have ever seen. The band was instrumental, both in terms of having no singer as well as ushering in (along with Galanas Cerdd) the new wave of instrumental postpunk to exist in Atlanta through the late 90's (i.e. Ocelot, Plastic Plan, Mock Heroic, Moreland Audio, etc.).

Here is a quick interview with them before their show last year at Eyedrum. I probably should have done it later in the day when there would have been fewer interruptions, but whatever:

BD: Correct, the Moreland Avenue Tavern was our last show.

JJ: And it was the last show for the tavern, right?

JJ: And your first show was at the Moreland Avenue Tavern.

BD: Correct, we actually have a video of that.

GF: We actually played with San Agustin at our first show.

JJ: Who played your last show?

GF: Just us, we played an hour of material.

Lee Corum: Sweet – can I have one (motioning to the beers)?

BD: Dude, this is a Purkinje Shift interview here.

JJ: Scott, you moved away at that point, right?

JJ: When did you move to France?

JJ: You haven’t played in any bands since?

JJ: But you were in Rebar and Barrel before, so it’s not like Purkinje Shift was your only band.

BD: And John Brown too.

JJ: So why did you guys decide to play today?

GF: Primarily because the three of us knew Thomas Peake, and he wrote an article on Purkinje Shift in Creative Loafing. I think it really helped us a lot with that, and when we heard the show was going to happen, Ben and I wanted to get on the bill with our new band (Lumens). I told Scott about Thomas, and he was going to be in town that week, so why don’t we try to do it? We can learn a few songs and practice, and if it doesn’t work we just won’t play. It went well, so we are going to play a tribute.

JJ: San Agustin is playing as well, so it’s a nice lineup. So from the post punk scene, you guys and Galanas Cerdd were the first fully instrumental bands from Atlanta at that time, but kind of ushered in all the instrumental bands that came after, like Ocelot, Mock Heroic, etc. through the late 90’s and early 2000’s.

BD: Originally I was going to sing, but when I started singing on one of our songs, it sounded like Seely, so we were just like “none of it”.

At this point, Eric from Hell Mach Four comes in and completely crashes the interview.

JJ: It wasn’t intentional to make an instrumental band?

BD: It started out with three guitarists, Sadek Bazarra was the other guitarist, and when that fell by the wayside we were like “well, we have to have vocals”, and it just didn’t work. I wanted to sing punk rock style at that time, because I had just been in Habeas Corpses.

JJ: But there was a gap, it had been a year and a half or so between Habeas Corpses and Purkinje Shift? So you had enough time to decompress?

BD: Yeah. I was playing in Charlie Parker at that point.

JJ: From the Purkinje Shift starting at that time, it seemed like such a break, as Barrel was coming from a post punk style, and then Purkinje Shift came in and most of the punk element was out, and it was almost like a jazz band in a way, but maybe because it was instrumental, maybe it was because you started wearing suits, maybe it was because of the artwork of the releases, it came across that “this isn’t your house show band”.

BD: Definitely, it was loud but it was straight up.

Now Rick Moore interrupts and inadvertently shuts down the interview. No problem, Lumens goes on and plays a great set, and then Purkinje Shift showed everyone exactly how it’s supposed to be done. Definitely one of the best bands of their genre, anytime anywhere.

Please check out Ben Davis' blog for plenty of live recordings by Purkinje Shift and his related bands. Thanks Ben, Gary and Scott for everything.

Here is the artwork for all the Purkinje Shift releases: 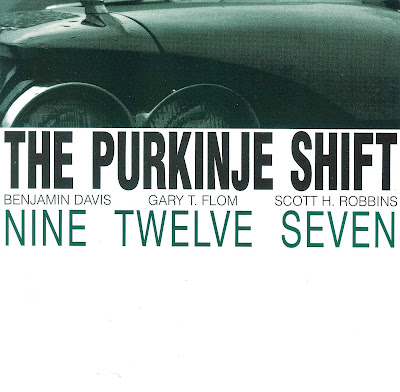 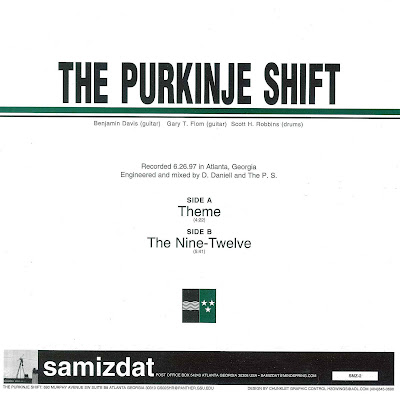 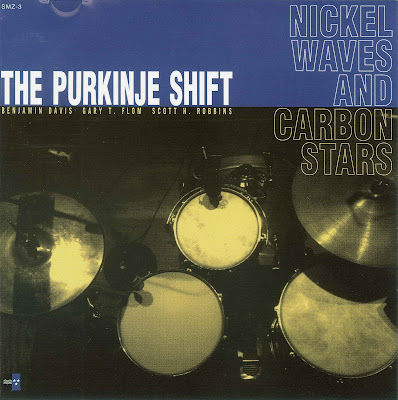 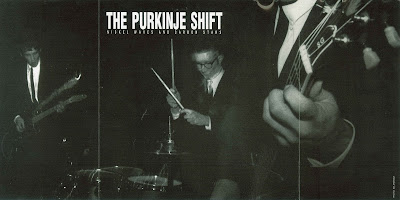 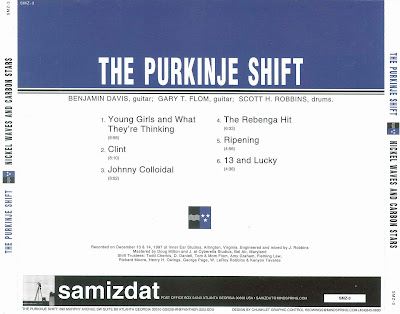 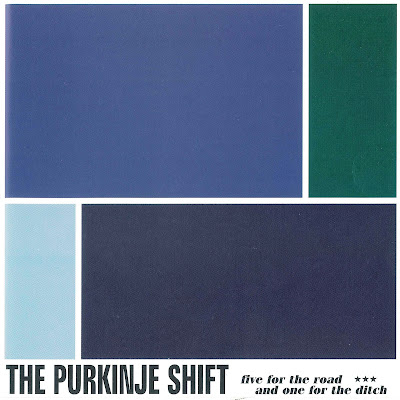 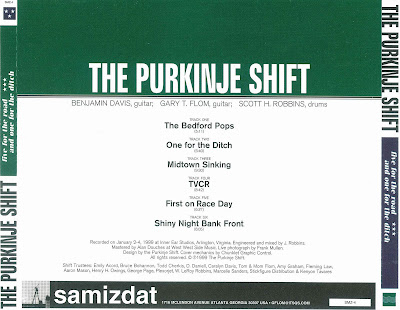