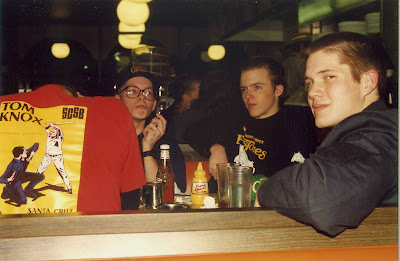 You wanted the best - you got the best. Here are the entire studio recordings of the Midget Farmers. 33 songs in total!

Here are all the songs for download, in both MP3 and M4A format: 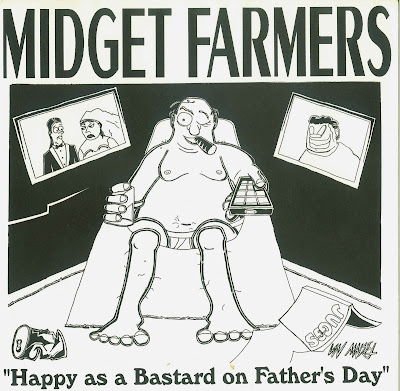 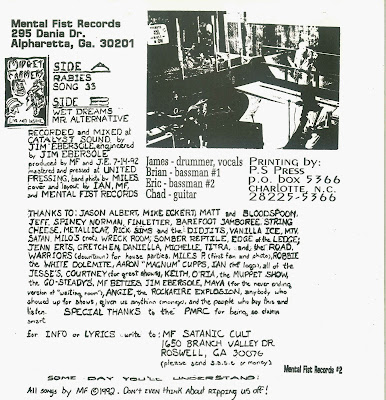 Man, I should have quit when I was ahead. Could any first recorded output have been better? Ok maybe, but it really seemed to hit the mark when we were in 11th grade. It got a good review in Maximum Rock n Roll, even had a picture! It was a big-hole 33, so when we put it in Michelle Ward's jukebox, it played super fast. Cover art by Ian Maisel, who became kind of the Raymond Pettibon of the Midget Farmers. I got the title from a comic book called Marshall Law, which was similar to Judge Dredd. I have named actually quite a bit of the records that I have played on, I guess it was a talent. This was Mental Fist #2, right after the Bloodspoon 7". More on Bloodspoon later.


Here is a better image of the photo on the back cover of the 7": 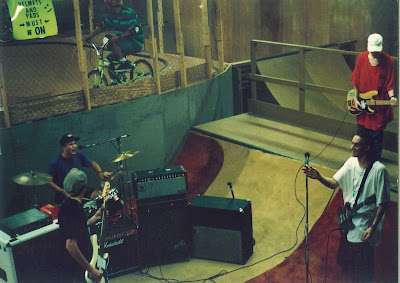 Jason Albert (our first bassman) is on the bike above my head. We played a skatepark in Greenville, SC where Jason moved sometime in high school. Eric really enjoyed playing on the deck of the mini ramp. Only Miles Peterken watched us (and took the picture). Everyone else listened in the parking lot, because they didn't want to pay to see us.

(click on any image to check out the gory details)

The executives at Mental Fist Records (i.e. Matt Mauldin and Jeff J. Jawk) wanted us to do an LP, but we decided on a tape instead. It was hard enough getting people to buy the 7", even back in 1992 people didn't really understand it. Tapes were what high school kids listened to. The title comes from Waffle House's motto: America's Place to Eat, America's Place to Work. At the time, all of the high school kids were really into spending huge amount of time at the Waffle House, mainly drinking coffee. I'm sure this has transitioned to the Strarbucks by now. We had a general disgust for these people, and pretty much anyone in general, so the America's Place to Waste Your Life was an ode to this practice. Anyhow, My Les Paul is actually written by Danny Bloodspoon, who used to play shows with us without ever practicing or learning the songs. He was actually not too bad at it either, since he could just watch Chad and follow along without missing a beat. This is the debut of the A-Team Theme, which I believe came out pretty well (especially the samples). On My Life in 20 Seconds, you can hear Jeff J. Jawk screaming for Money and Pussy, which was another early song of ours, but never made it onto a proper release. We actually recorded it in the garage of a guy named Ross Mann, and sent it to Creative Loafing to be on their music menu. You could call up a hotline and hear the song over the telephone to hear what MF sounded like. I think we were the first band to submit a song, so our number was something like 1111 on the hotline. Light Up is about Ross Mann, but also a homage to Stand Up by Minor Threat from the Flex Your Head compilation. The Fall of the Memphis was about this Memphis guitar that we stole from Jim Huffman's brother, and Chad played it for a song at the Wreck Room on the outside stage that was a beach, and threw the guitar into the crowd and into the beach sand. The guitar was completely destroyed, but it was a fun show. Of course we still had the 2-bass lineup at that point, if you look at the band drawings by Ian Maisel, and it was recorded at the same studio as the first 7" by Jim Ebersole somewhere in the Dunwoody area off Peachtree Industrial. 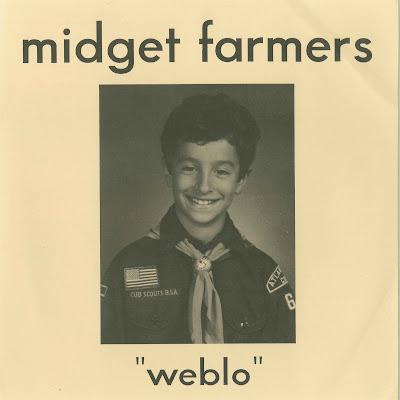 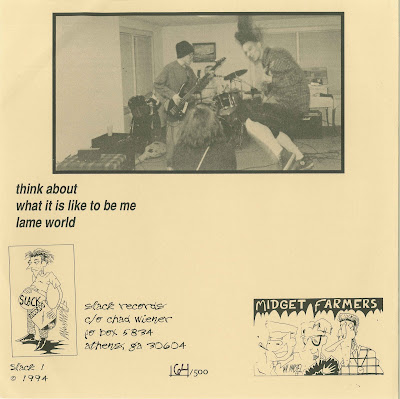 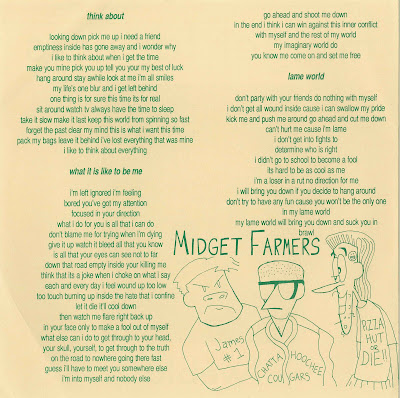 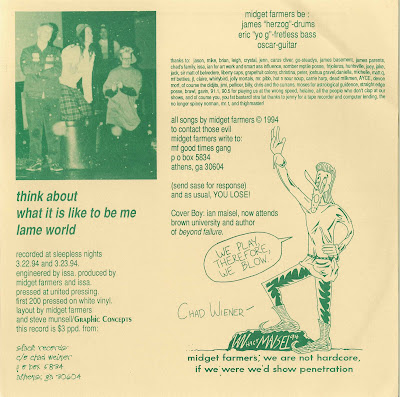 I don't know how I got #164 of this 7", as I was the drummer. Anyhow, these last songs were recorded at Sleepless Nights studio on Candler Road across the street from Full Moon Records. Issa Diao was the engineer, and I remember having a good time on these recordings. I played them pretty well, and they didn't sound as bad as some other stuff coming out of that studio at the time. I still have a few boxes of these 7"s if someone wants a copy. Ian Maisel was the cover model for the 7", and he does all of the drawings on the inside and back panels. By this time we were a 3-piece, and Eric did most of the singing (Chad sings Get Off My Jock, of course). We were officially a college band at that point, and I think it was a difficult adjustment to make. There is a distinct difference between a high school band and a college band, and I think we were a great high school band, but a really bizarre college band. By the end of my sophomore year, I needed a change and we decided to end the band after a short tour of the east coast. I will tell more about that later.

Here are the songs from the 7"

Also, here are some extra songs we recorded at the same time, but were never released: