Death is on the Doorstep - The final Sonn Av Krusher show on Friday May 1, 2009 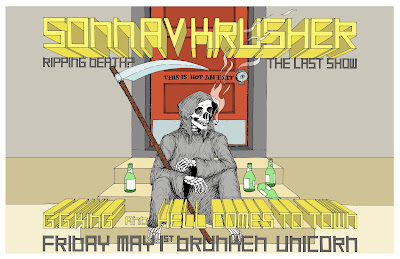 Update: Here is the Sonn Av Krusher set and the G.G. King set from the show, for your listening enjoyment.

This Friday at the Drunken Unicorn will be the final show of Sonn Av Krusher, which is a band that Gray Kiser and I started after moving back to Atlanta in 2006, and soon added Matt Mauldin to the fray. Well, two children (total = 6 for the band) and 13 shows later, we are going to fold up the banner and put the Krusher out to stud. I will be playing with both SAK and G.G. King at this show, so with any luck I will avoid having an aneurysm before the night is through. Here are some descriptions of the bands put together by Gray:

Hell Comes To Town - lumbering bear awoken from winter slumber wildly swings paws at cave intruders. If it means anything, the guitarist was in the original Zoroaster lineup.

G.G. King - frantic babysitter realizes child in her care has wandered over to the edge of the family pool, of course, she's a little too buzzed to really do anything but laugh. If it means anything, the band is made up of the old Carbonas, and Gentlemen Jesse and His Men, and many many more.

Sonn Av Krusher - naive boy accepts invitation for ice cream and cartoons in the apartment adjacent the bicycle shop, decides it's worth the ice cream to humor an older man in the sunset of his life...plus boy sees wad of cash in sock drawer he will pocket later after old man falls asleep...and not to mention...it feels alright.

It's been a great couple of years - I hope to see you one more time. Here is a collection of flyers thus far: 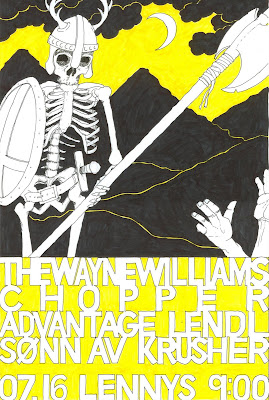 June 16, 2007 at Lenny's with The Wayne Williams, Chopper and Advantage Lendl. Gray put the wrong date on the flyer. 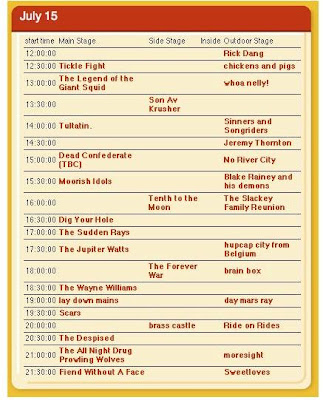 July 15, 2007 at Corndogorama with everyone you see here. Fun show, even if we played at 1:30 in the afternoon. It was our second show, so you take what you can get. 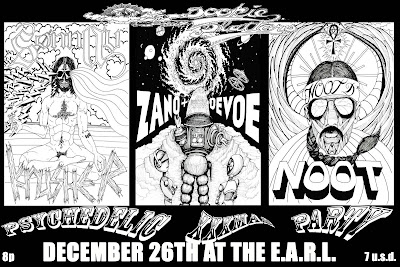 December 26, 2007 at the EARL with Noot d' Noot and Chris Devoe/Zano. This was under the notion that if you get all your friends together to play a show, everyone will have a good time even though the musical styles are completely different. We basically bummed out and maybe scared the EARL crowd a little bit. 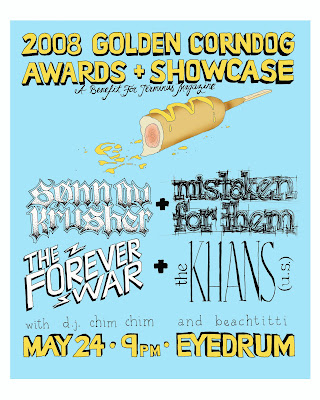 May 24, 2008 at Eyedrum with The Forever War and Mistaken For Them. This was the show where we one the golden unicorn trophy for "Atlanta's Gayest Band", and by gay we mean happy. 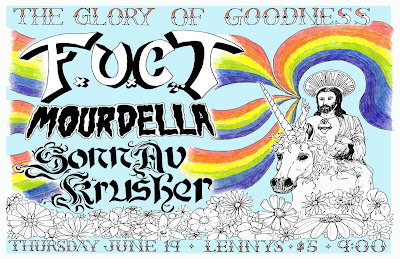 June 19, 2008 at Lennys with F.U.C.T. , Mourdella and Sex In Cars. F.U.C.T. is kind of what Sonn Av Krusher was trying to be, so it was a real honor to play with them.
Here is another flyer for the show made by the Sex In Cars guys: 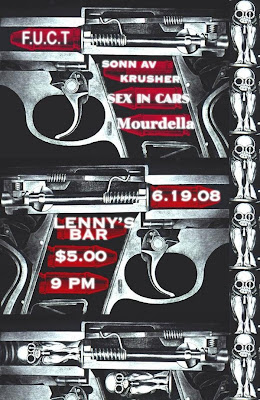 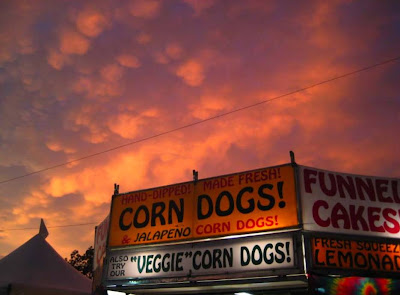 June 27, 2008 at Corndogorama
Here is a little blurb on the set by Tim Shea in Stomp and Stammer:
One of the principal reasons I even bothered to come out to Lenny’s today, the second day of this year’s Corndogorama festival, was to see Sonn Av Krusher, who I had seen a year ago at Corndog and they blew me away. I haven’t heard hide nor hair of 'em since. Basically, throw the Swans, King Snake Roost and Skullflower in a blender and you get these guys. Needless to say they're one of my favorite bands in town. They don’t play out much, but do yourself a favor and catch ‘em when they do. If you're a lover of power-bore drone pummel they do it better than anyone else in town The drummer apparently plays guitar in Noot d’ Noot (for those who care). 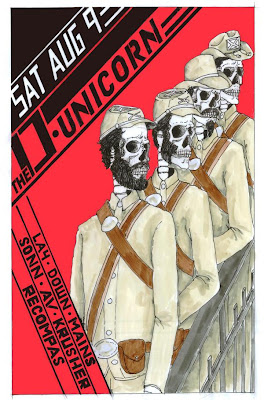 August 9, 2008 at The Drunken Unicorn with Recompas and Lay Down Mains. Another great Gray Kiser flyer, a concept I was looking for in the show. 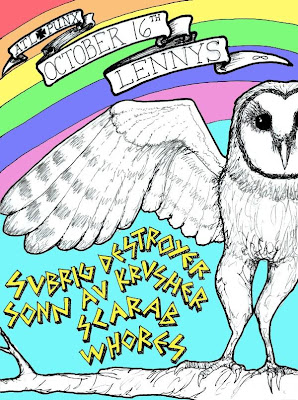 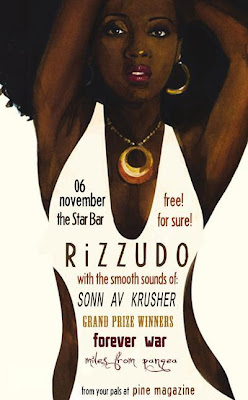 November 6, 2008 at The Star Bar with Rizzudo, Grand Prize Winners from Last Year and Miles From Pangaea. We had nothing to do with this flyer, but at least one was produced! 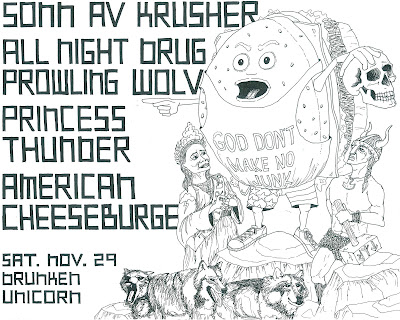 November 29, 2008 at the Drunken Unicorn with All Night Drug Prowling Wolves, Princess Thunderstorm and American Cheeseburger. We definitely got the short end of the stick in having to headline over these bands. 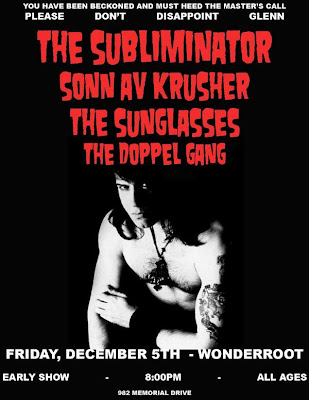 December 5, 2008 at Wonderroot with The Subliminator, The Sunglasses and The Doppel Gang. Thanks to Gavin and Cory for watching our set. We do it all for you guys. 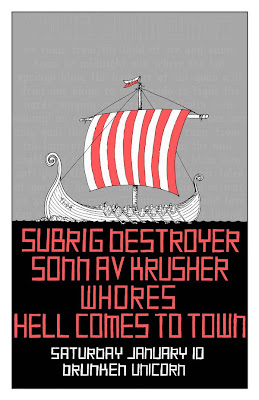 January 10, 2009 at the Drunken Unicorn with Subrig Destroyer, Hell Comes to Town and Whores. Probably the best overall show we had. I wish they were always like this. 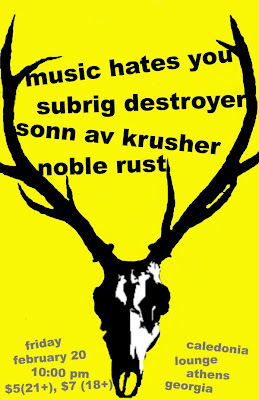 February 20, 2009 at the Calendonia with Subrig Destroyer, Music Hates You and Noble Rust. Our big one city tour of America. Still enjoyed it.
Posted by James Joyce at 9:03 AM