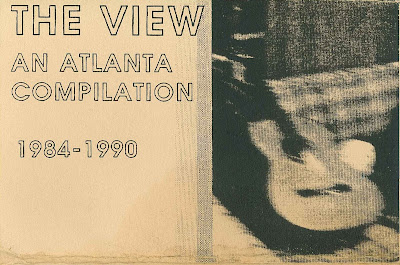 Here is the track listing:
01: Ban KA - Ode To Phil Phons
02: Neon Christ - Drawn In (Savior)
03: Gardens Of - Sacrifice
04: After Words - Things They Never Taught You
05: Stickmen - Rusty Musty Mildew
06: Jumpstart - Wasted Breath
07: Dead Elvis - Beercore
08: Kicker Boys - I Don't Scare
09: O.C.B. - Try To Understand
10: Groundwork - Life Sentence
11: Threshold - Raging Dawn
12: Face - Second Half
13: Full Frontal Nudity - The Good Doctor
14: Third Season - Poison In The Water
15: Balrog - The Incident
16: Such As - Empty Words
17: Wrong Answer Zoo Breath - Trees Again
18: Act Of Faith - On My Own
19: No Walls - Never Fall Apart
To me this is the seminal local Atlanta compilation of the early 1990's, or the late 1980's, if you want to be technical about it. This is the tape that introduced me to local music, and provided me a great overview of the bands that came before. This was kind of an overview of Atlanta bands from the late 80's, as after 1990, very few of these bands were still around and playing, and I got to see very few of them myself. Act of Faith of course takes the title of longest surviving band of this compilation, as they were pretty much just starting when this came out. I bought this tape on the street in Little Five Points, from someone affiliated with Lunchbox Records, although I'm not sure if it was one of the Wishart brothers, I just remembered a dude with a box of these tapes who was asking random people on the street if they wanted to buy a copy. I was in 10th grade at the time, and it really opened my eyes to bands outside the typical SST, Touch and Go, Homestead, Dischord, etc. bands of the time that I was currently listening to.
I ended up playing in bands with a few of these guys (i.e. Such As and Third Season), and have featured several of these bands on this blog (i.e. After Words, O.C.B., and Act of Faith), but some of these bands I have heard of very little outside this compilation. Ban KA, Stickmen, Kicker Boys, Groundwork and Face were bands that I may have seen on a flyer or two, but definitely never owned any other releases by them. Neon Christ is one of my favorites, and funny enough probably the first punk band I ever heard, as my friend Miles Peterken used to play for me a dubbed Neon Christ tape long before I ever got this release. Car vs. Driver actually did a cover of Savior on our second album, partly because it is a great Neon Christ song but also as an homage to the bands of Atlanta's past. William DuVall, the guitarist from Neon Christ, joined the SST band Bl'ast! after NC split up, and then formed No Walls in Atlanta (also featured on this compilation). He has also done a ton of other music, and now is the current singer for Alice in Chains. Here is an interview done between him and Randy DuTeau, the singer from Neon Christ.
Jumpstart was Bruce Bohannon's band before Third Season, who was before Fiddlehead, who was before Freemasonry, who was before Galanas Cerdd, who was before Copa Vance, and so on. Dead Elvis is of course just awesome and hilarious at the same time. They played this year at the 688/Metroplex reunion show, but I unfortunately I didn't see them. Kip Thomas told me that Threshold was this super religious proto-emo band, but other than that I know nothing about them. Midget Farmers once played a show with Balrog at The Wreck Room, and I met one of the guys in the band when I went off to college in Athens in 1993, and he was super nice as I remember. Such As was of course Steve and Scott Wishart, later in Car Vs. Driver, Scout, etc. As for Wrong Answer, I never got to see them live, but I remember meeting a few of the guys when Car vs. Driver played in Bloomington, IN. I will post their single sometime soon.
23 February 2009 Update - Steve Wishart, who was one of the guys that put this tape out, commented with a complete history of this release and the associated bands, which you should really read instead of my ramblings above - and here it is. Thanks Steve!
The story behind "The View". Several of us at the time felt that Atlanta not only had a great upcoming crop of punk bands, but a great history of punk bands as well that weren't being heard. The effort mostly lead by Jeff Ferguson, Doug Ahern, Chris Foley,Kip Thomas, and myself was to create a comp that showcased the great bands of Atlanta's recent past and its current ones. From the proceeds of the comp we would begin to put out records and build an Atlanta punk label - following the model of DC and Dischord. We made 500 tapes and sold them for $5. We sold out in a couple of months. The money then was funneled into the first Fiddlehead 7" and the Bag of Jakes comp 7". Some money from the comp also went into the Wrong Answer 7" but it was mostly financed by me personally.

So The View was also the birth of Lunchbox Records. Although originally a collaborative effort amongst a group, most dropped out quickly leaving me and Doug running things - then it was only me.

Chris and Doug did most of the work on compiling the bands here and getting copies of the songs and permission to put them on the comp. So a couple of the bands I didn't know that well or have more than what was given for the comp, but here is summary of some of the bands:

BAN K.A. - old Atlanta band that I don't remember who was in it or what they did after, but one guy in the band ended up demanding money from us and threatened to sue us after the comp can out. I think we paid him $50-$100 or something. If I remember the story correctly Phil Phons from the song was some skeezy promoter in Atlanta that everyone hated.

Neon Christ - the forefathers, the legends, one of the greatest Atlanta punk bands in my opinion. I loved this song from the second I heard the opening note. When car vs. driver decided to do a cover I knew immediately that this was the song I wanted to do. Matt was immediately on board and when we asked James so was he. Jonathan had never heard it though, so we played it for him and it was unanimous. This song is just so gritty and the style and sound of Kip's guitar is just incredible.

Gardens Of... - this was Neon Christ minus Kip and Jimmy moving from drums up to guitar. This band was amazing, but the song here was later day Gardens Of... and doesn't really capture how amazing this band really was. I have a live recording of them that is just incredible. Just think of Neon Christ continuing to progress and that is what the live recording is like.

After Words - another of my all time favorite Atlanta bands.

Stickmen - I saw play once or twice. Great band. Some members went on to One Soul Down, but after that I don't know.

Jumpstart - Kip Bohannon's band prior to Third Season/Fiddlehead. I love this song!!! Wish they had recorded more. Maybe Bruce has some tapes we should get from him.

Dead Elvis - always a great and fun band to see live. Put out 7" and there is Live at WREK recording of them also.

Kicker Boys - they put out a great 14 song album. If you can find it, buy it!Threshold - as James said they were a really religious band. Chris Foley I believe was in this band and the reason they are on here because he helped put the comp together. This band was either post or prior to Now or Never - another Chris Foley religious punk band.

Face - this was Geoey Cook's band prior to Fiddlehead. He might have more recordings from this band also to share.

Third Season - this was pre-Fiddlehead (Kip, Mike, & Bruce) with Jason on vocals. Great poppy DC-emo band. James has a post coming of their recordings.

Such As - well we have much better songs that we recorded so I don't know why we put this one on here. Got to live with the decision though. I was 17, Scott and Brian were 15. I stopped signing lead vocals after this band, this song is a good example why! One day I will get the Such As recordings to James for him to post.

Wrong Answer - Atlanta's version of an East Bay Lookout band. Put out a 7" on Lunchbox.

No Walls - just amazing song that once again shows how much of an incredible guitarist Kip Duvall is. After Neon Christ, Kip was briefly in B'last (the SST band), then Final Offering, and No Walls.

Groundwork, Full Frontal Nudity, and Balrog I don't really remember much about at all. I think the guys in Fiddlehead know more about them though.

So there are obviously a lot of other great bands from the 1984-1990 era that didn't make the comp, but this still remains a good overview what existed at that time.

Please get in touch if you have any other releases by these bands - I'm interested!
Posted by James Joyce at 3:01 PM