Dirt - Our Forebearers in Atlanta Noise-Rock 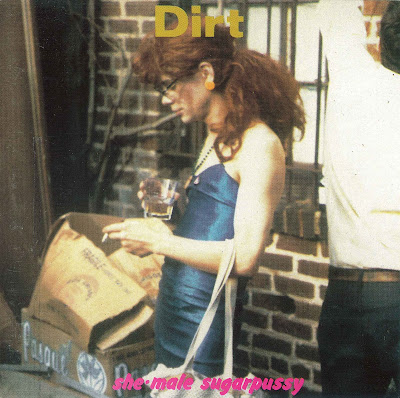 What were you doing in 1989? I can guarantee it was nothing compared to what these guys were up to. They were so ahead of their time in this town - I can't even imagine what people must have thought of this band back then, but I think they would rule this town today. I never got to see them live myself, but I had heard of their legendary status even back then when I was in high school. Actually, Stewart Voegtlin from William Carlos Williams wrote this piece on The Left Hand Path, which sums it up better than I ever could:

"It keeps you fit - the alcohol, nasty women, sweat on stage, bad food - it's all very good for you."

Some said Bonny Scott reborn, or Brian Johnson's shrieking shadow, an avatar of tres chord rock 'n' roll, stereotyped spitsink antics, Elvis zee Pelvis shake, rattle, roll. Hyperbole aside, John Forbes was very much the incarnation, google-eyed, gyrating; the gushing showman, a smile like The Young Traci Lords's gash: supple, crazed, welcoming. The rest of the [early] band was nothing close to Vomit, Lou, Deno and Gary; there was Jennifer Hensley, Runaways incarnate, smoldering in lip gloss, razorblade charm, navy blue coveralls. Dean Clyne and Georgia's answer to Phil Rudd, the late Allen Page on bass and drums respectively. Atlanta was indifferent as usual. The Royal Peacock, Clermont Lounge; well drinks for $2.50; Bud and High Life cans half the price. Poison's quick trickle had a lot to do with it. Most folks were furniture by 11 p.m. Forbes would come out, lightnin' bolt legs, Schlitz beer can hat upon his head. Plug in. Look around. Smile. Page would count off and away they went. Three hours later and Buckhead Safety cab lays down the law: Any one of you guys pukes in my ride and it's $40 flat. No if sands buts. Got it?

Before Page spilled his fluid thuds upon Hensely's maggot writhe wah, big-haired Deanna Gonzalez warmed the drum throne with junk trunk. Page musta seen 'em with DG; he basically cribbed his whole approach: heavy hands on hi-hat and snare; kicking through that gawdamned kick drum. It would have been too much; Forbes and Hensley locked-jaws with true Rodehaus Bluez. Leads written for lairs outta place even in James Dickey, in Harry Crews. The sort of sultry "please, cum onan fuck meh," schtick Gifford/Lynch tried to land with siren belle, Lula. Instead it comes off as lots of granny come-ons; rosewater perfume ain't no way to keep a man interested.

One can dance to Dirt. Perhaps that's why the name sounds sensible. Honest. Easily arrived upon. Two feet to the floor, shakin' ass, etc, etc. Keepah knockin but ya can't come in... Little Richard, James Brown, the Grady High School Marching Band; that's where the beatz; the riddims rose from. Past, present. Near, far. Forbes fashioned the take bright, belligerent. By the time the two singles and single split clipped into a full-length, the local foax had nothing left to do but corral Benjamin "Smoke" into his Sundee best and snap that shot. Nothing quite like a tranny queer drinking two fingers of Kentucky Gentleman and working on a Basic 120. And the title... She-male Sugarpussy. The band printed the song list on the spine; motherfuck a lyric sheet. Personnel was printed on the label. Whew. Lotsa print putz whined and opined; dude's voice sux; AC/DC, or worse: Rose Tattoo. Forbes really only ever sounded like Gilbert Godfrey passing a habanero hairball through his urethra. Despite the shenanigans, Dirt continued. David T. Lindsay, basically the only sensible "music writer" to ever call Coca-Cola Kingdom home, put their records out; he attended their shows; he served them the best compliment ever, setting them as the IDEAL in the midst of so many "show reviews" plundered about the pages of Creative Loafing. Cutting foax down to size was immensely easy; all Lindsay had to do was scribble this sentence on the end of every blurb: "________ is every bit the band The Black Crowes aspire to be but no where near as great as Dirt." I thought he'd do it once, twice maybe. Lindsay did it for months. It got funnier and funnier. It's still funny.

Dirt may not be the IDEAL. But then again they may be. She-male Sugarpussy isn't a great record. But it's good. The song titles are almost as good as the record's title: "Nude Dancing In Arizona;" "Palm Full of Pork;" "Sad Hash;" "Cold Fish." I understand these song titles. They are my past, present, future. They have to be. It's neither Heavy Metal, nor "Hard Rock." Despite all the groove and blues references they might just have sounded like a second-rate Zepp, circa Houses of the Holy, at precisely five fucking times the speed. "The Crunge" was Page/Plant preening groove and blues; "The Ocean" gets them even closer to Forbes and Co: "Naaaah, naah, nunnah neh nah naw, neh nah naw neh nah neh naw naw...." Ain't much difference 'tween tunes. "Sad Hash" the exception. Hensely comes on with Peter North cumshot wah. Thick, ropy, serpentine. Forbes refuses to play charmer, just screaming, shrieking, howl. Foax who ever thought they might need a vocal "approach," would never approach Forbes' thought as vocal. It's a lung thing. A heart thing. Darby Crash with Bowie's haircut. Or vice versa. And then to look over at Hensley scraping her SG, the beat goes on. And on. And on. IDEAL is forever. Every bit the band The Stones aspired to be but no where near as good as _________.

As you probably know, John Forbes and his girlfriend Jennifer (not Jennifer Hensley, who was in Dirt but then joined Seersucker) moved up to Chicago after Dirt ended in the early 90's to start Mount Shasta, who I was a huge fan of. In fact, when hal al Shedad recorded our second album with David Barbe, I was most excited because he recorded Mount Shasta's "Who's The Hottie?" album a few years before, and it is a favorite of mine. David said that John Forbes had the loudest voice of any singer he had ever worked with. He could blow out a microphone in the studio from across the room. Also, he told me that John wrote actual lyrics to all his songs, but good luck verifying that one. Dirt is just great, totally visceral, and must be acknowledged for their contribution to Atlanta music.

Above: Cover for their first album "She Male Sugarpussy - Drill the Minx", which included all the song titles and information on the record spine, which was brilliant. Interesting to note Benjamin Smoke as the cover model, from Opal Foxx Quartet and Smoke - seminal Atlanta bands. Below is the insert from the CD and the back cover. It's interesting to note the era they were coming from based on the thank you list. Even Drivin' n' Cryin' is thanked. 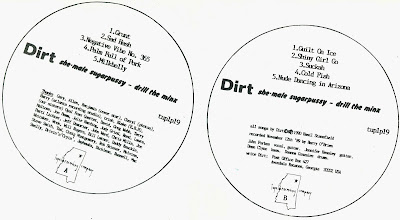 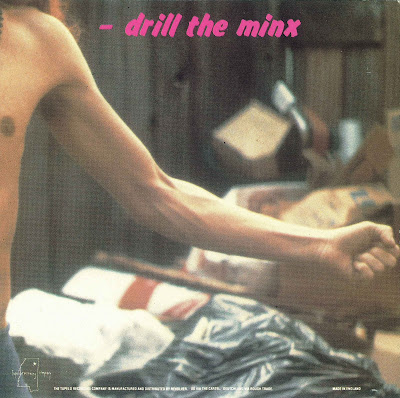 Here is the cover for "Sahara of the Bozart", which was graciously provided by Stewart. 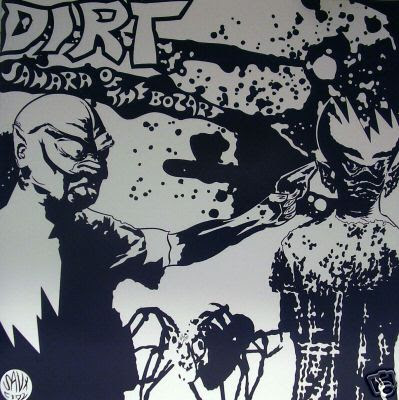