Wheeljack - The Overachievers from Cobb County 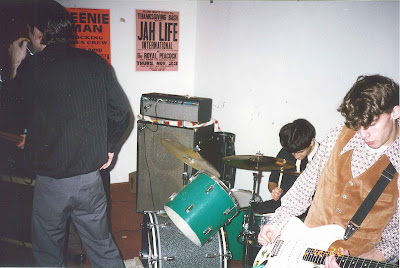 Above and below: Wheeljack rocking the Driverdome in January of 1996 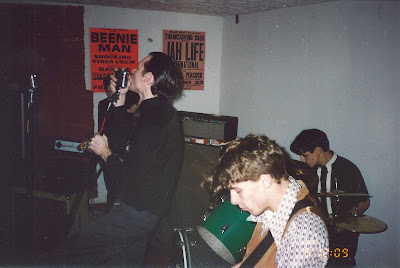 Out of all the Atlanta bands that played the Driverdome back in the mid-90's, Wheeljack were the real artists, and the most creative of the bunch. In a way they were kind of like the band that Max Fischer would have started in the movie Rushmore. I thought they were excellent, and always had something interesting going on with their shows and their music. They had some really technical songs, with plenty of stops/starts, tempo changes, time signature changes, they really went for it on their songs. I still can't understand some of the stuff that their drummer Dave was doing on some of those tracks.

I assembled an unofficial discography, the first two songs of which are from the split 7" with Year Zero on Ben Lukens' Terminus Records (the Burn! For Two single). It was a great 7", as it had a match glued to the front, which I can remember gluing a few nights at Apartment 13 with Ben and Phil Dwyer - one strip of glue for the stick, one dot of glue on the match head. One other funny thing about this single, I saw it for sale a few years ago at a small record store in Hilversum, which is about 30 miles to the east of Amsterdam in Holland, and it still had the match glued to it! 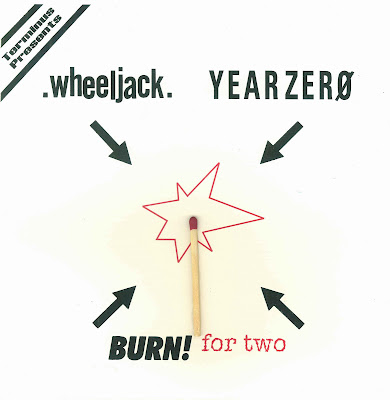 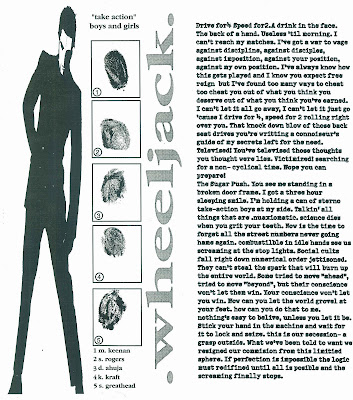 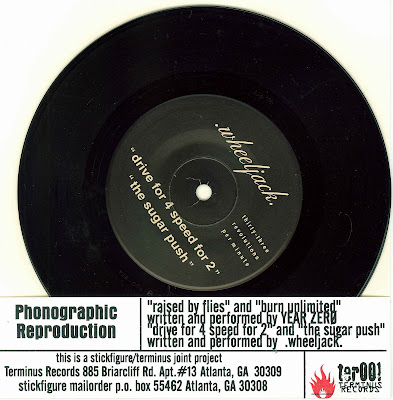 The next batch of songs are from the LP put out by Stickfigure (aka Gay Jay Records). I'm glad they put out this album, as so many of these bands from this era never released a full-length album, and usually only have a 7" or Live at WREK session to remember them by (I'm looking at you guys in The Forty-Two). When I was transferring the songs to CD, however, I noticed that I had nine songs and only 8 song titles. I know the last song is Iscander, so I combined two songs to make The Breeze, which might be incorrect. Please let me know if I screwed up the transfer, as there is no insert, lyrics or any other information to go by here. 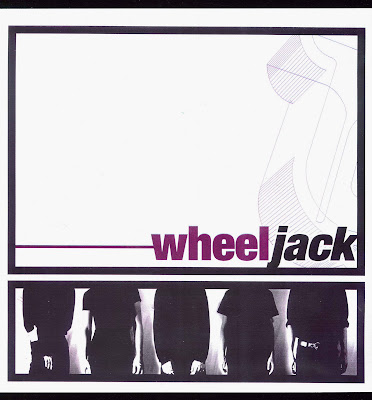 Wheeljack Album (front and back) 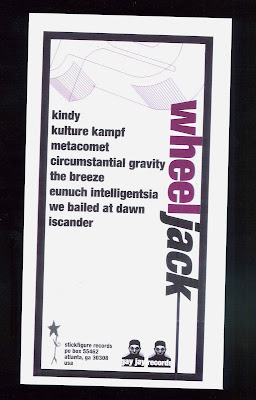 After the LP is one song from their Live At WREK session, that was on the Live at WREK CD that came out about 10 years ago. I would like to get their entire Live at WREK recording, if anyone has it on tape. Sean? Mike? Dave? How about you Josh?

Chris van Etten contacted me recently about several items on my want list, and that included the first Wheeljack demo tape. I have digitized it and added it to the end of this discography. He told me that they had a few other songs that were recorded at the time of the split 7" with Year Zero, but he didn't have them and the Wheeljack guys probably didn't want those songs to resurface anyhow. We'll just have to see about that.

So Sean Greathead (guitar) and Dave Ahuja (drums) are living in New York (surfing on Long Island and making music videos, respectively) and I will see them from time to time when I am up there. Michael Keenan plays in Battlecat and Hawks here in Atlanta, who I would like to play with someday, but haven't had the opportunity yet. Scott Rogers has been around and about, but I haven't seen him myself in a long time. He started a band with Chris van Etten called Flakscrampe Tramauntra, and then went into Electrosleep International with Michael Keenan. Mike and Sean played in a band called the Mascara Aesthetic with Josh Fauver and Derek Beber for a while, and then Electrosleep International, etc. Chocolate Kiss played with both of these bands a few times back in the day, but my knowledge of that stuff is a bit hazy right now, so sorry about the mistakes. I have not seen Kate Kraft since she was playing keyboards in Wheeljack, so I'm sure I would not recognize her today. I played in a short-lived band called Ananke with Sean before he moved to New York, and it was really great to finally play with one of these guys. He has a really interesting guitar style, that was maybe not the best match for my drumming at first, but I really liked making music with him. These are great guys, and a great band. One other piece of trivia/history: Frank Jensen from The 42 practiced with Wheeljack twice after Dave Ahuja left for New York, but then got into a car accident and broke his hip, and Wheeljack effectively disbanded after that point. Frank then played further in Chapman Park with Scott McFarland (aka Scott MC) and Scott Wilson (aka Emo-Beard), and then moved to Chicago to play in the Tyrades, etc. etc. etc.
Posted by James Joyce at 9:39 AM