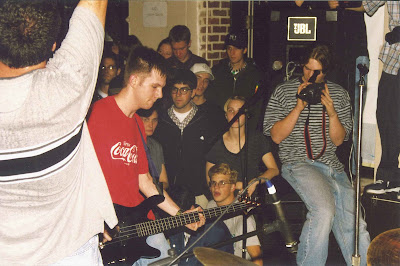 Car Vs. Driver played our official last show on July 21, 1995 when Jon Rothman moved to Misoula to study Forestry. Steve moved on and joined Scout on bass to replace Theo Witsell, I continued drumming with The hal al Shedad, and Matt did his thing until the two of us started playing again in 1997 with Joyce, which turned into Chocolate Kiss soon afterwards. Anyhow, Jon was back in Atlanta around the Summer of 1997, so the four of us were living in the same town again and decided to do a single reunion show. The show was at Under the Couch on the Georgia Tech campus in Atlanta, which was a nice performance space that hosted some great shows from 1996 to 1999 or so. CVD never played there when we were a band, but the Somber Reptile was on the downturn by this point and for this show we needed a place larger than the houses like the Driverdome and I-Defy that were booking most bands back then. Also, on the bill was The Promise Ring and Compound Red, both bands being at essentially at their peak at the time. I was nervous about headlining over TPR, as we were definitely not the indie/pop powerhouse that they were at the time, but it worked out in the end. We played a 13-song set, which leaned more towards our later material, but those songs were being written as we broke up, so it was nice to get to play them some more. One of the songs, I believe it was "Your Song", was never played live until this reunion show. The set was recorded by Scott MC from the soundboard, and sounds pretty good, although it cuts off before the last song "Without A Day", which is too bad as it was the band's most popular song. The show was also recorded on video, however, and Kevin from The Sound of Indie has posted the song on his great website - check it out here. He has been transferring many of my old tapes to DVD, and in return has posted some great performances from my collection. Jon Rothman bought an entirely new guitar and amp setup for the show, which in retrospect might have been bad idea as it would change our sound a bit. He used to play a Gibson Sonex guitar with a Marshall JMP 100 watt head (with no gain knob - only straight volume, which was loud) and the matching 4 X 12" cabinet. For this show he bought a Hiwatt head and a G&L Telecaster, which I believe he still uses. At our first practice in preparation for the show, the Hiwatt head blew the speakers on his Marshall cabinet on the first or second song, and he had to replace them before the show. I had my "new" old drumset that I bought earlier in the year after The hal al Shedad played several shows with T Tauri on the West coast. Their drummer Greem had a 24" kick drum, and after seeing it in action night after night I realized I needed one for myself. So I traded in my old Pearl set for a Tama Imperialstar from the 80's, and I still play these drums today. Steve had the same setup as usual, and Matt had the same voice, although he grew a beard for the show. We played pretty well, and although there is much more space in between the songs and more embarrasing banter, I think we were the same band that played two years before. If we played now, I have no idea what that would be like. We could probably do it, but Jon has been playing light indie rock for so long now I'm not sure if he could pull off the guitar work anymore.

Here was the flyer for the show - 1997 computer graphic design style.

Here is my set list from the show, with my great handwriting. 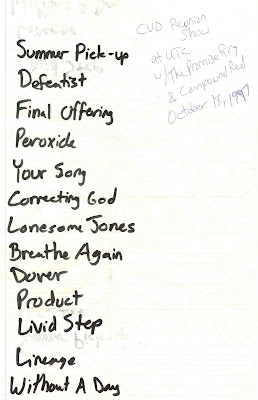 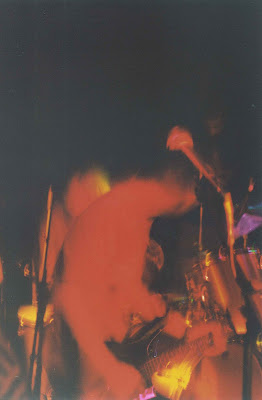 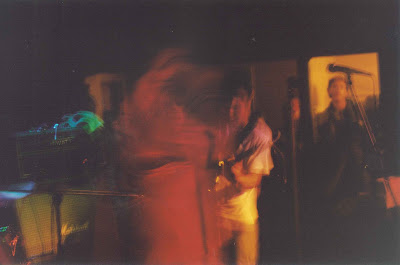 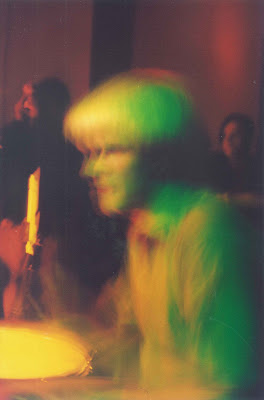 James Joyce is on the drum set calling it four by four. 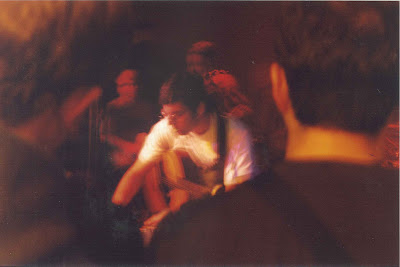 Jon Rothman also did a solo set of acoustic guitar and keyboard loops, which was kind of random but cool.
Posted by James Joyce at 2:56 PM