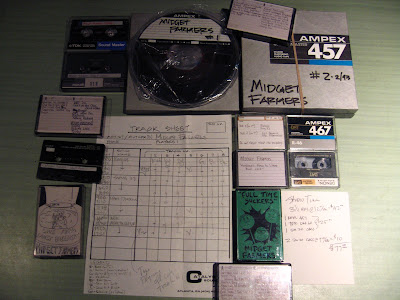 Okay, so just as a disclaimer, all of the recordings on this post predate the first Midget Farmer 7" that was recorded in 1992 when we were in 11th grade. So this stuff is going to be pretty rough and extremely goofy. If you want the actual Midget Farmers discography, please go here: Midget Farmer Discography.

Here are the recordings:

Chad Wiener was in town recently getting his doctorate in Ancient Philosophy, and I asked him to root around his parents' basement for any old Midget Farmer treasures, and he found it all. The picture above is everything he gave me, including the master reels for the Happy As A Bastard On Father's Day 7" and the America's Place To Waste Your Life Tape, as well as the DAT tapes for all recordings and many cassettes of early practices and demos (hereby included in this post). If you click on the picture, you can see the original track sheet for the Happy 7" as well as the bill for the entire recording, a grand total of $77! He also gave me a copy of the "Full Time Suckers" tape, which was a combination of the Weblo 7" and some additional songs recorded at the same time, all of which are on the complete discography posted earlier on this blog.

The Sexual Chocolate recording was recorded before I was actually in the band, I believe sometime in 1990. I work the tape recorder, and Chad Wiener does all of the vokills. Jason Albert is on bass and Mike Eckert is on drums. At the end, I sing some rough versions of Knowledge by Operation Ivy and King Of The Hill by Captain 9's and the Kinckerbocker Trio, which we were big fans of in the early days. Live and Insane is also I believe from 1990 or 1991, and we are playing all the classic MF songs in Mike Eckert's basement. There are some good interludes where Mike fights with his little brother, and other random hilarity, but it is mostly embarrasing for me because of my horrible singing. 665 1/2 - Not Quite Evil was recorded a little after Live and Insane with I believe Brian Lysne taking over for Jason on bass duties. We are in the Red is a recording with Eric Fickes on 2nd guitar, and was recorded sometime in late 1991 or early 1992. I called it this because Eric starts every song with "we are in the red - let's rock" or some version of that statement to let us know the recording light was on. The Live In James' Basement demo was also from early 1992, and is the last recording with Mike Eckert on drums. I took over soon after as we recorded the Happy as a Bastard 7". I believe this is our best version of the early MF sound, and is the most "professional". If you are going to download just one of these recordings, I would go with this one. Lastly, I included part of a live show from the Wreck Room and somewhere else (possibly Milo's), which gives you a picture of what our live sets were like. The last recordings are really rough, as Chad just put a tape recorded in the corner of the room, but the in-between noise is great. At the end of the last track, you hear Chad say something like "at least we got this awesome recording of the show" and the tape cuts.

I have also included many Midget Farmer flyers in my collection, shown below. Thanks for checking this out, and I apologize in advance for the rough, amateur, and silliness in the recordings, but that was our high school experience. 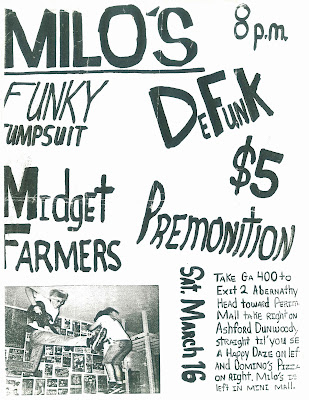 This was supposed to be our first official non-houseparty show, but when we showed up all the other bands had worked their way onto the slots before us, and we were pushed back to the end of the bill. DeFunkt took about 1 hour to set up, as the drummer had this massive cage and we listened to their bass player slap and pluck for the entire time, and eventually just left without playing. Funny thing about DeFunkt, I believe their guitarist was Ken later in Act of Faith. We played with a lot of funk metal bands back then. 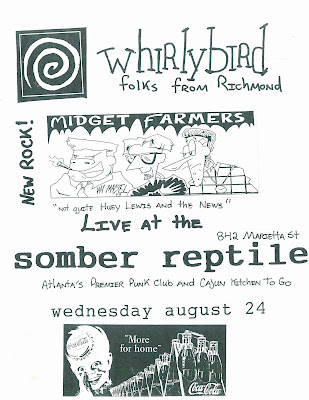 This was a late-era show with Whirlybird from Richmond, who we loved very much. I will probably post some stuff on them sometime in the future. This was also on my birthday, I believe in 1994. 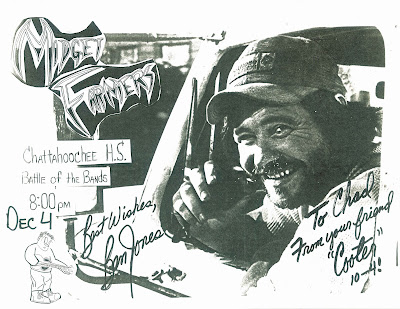 Chattahoochee Battle of the Bands - December 4, 1992. Chad had an autographed picture of Cooter from the Dukes of Hazzard, so we had to use it. I remember Danny Grady from Bloodspoon playing with us on stage at that show. 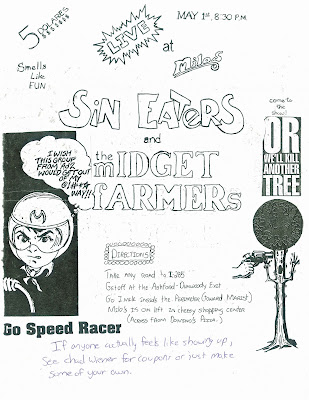 Here is another Milo's flyer with the Sin Eaters, who were very boring to watch. 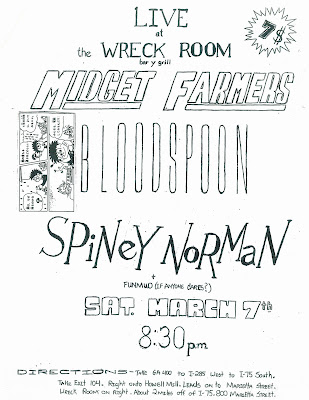 Playing with Spiney Norman and Bloodspoon at the Wreck Room (and probably 12 other bands as well including Funmud). What a lineup. 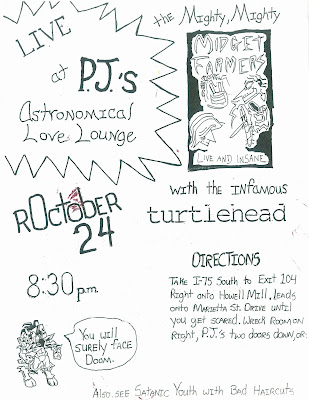 Live at PJ's Nest, which was the smaller club down the street from the Wreck Room owned by the same people. There was literally no one at this show and I remember Eric going outside during the set to play bass on Marietta St. 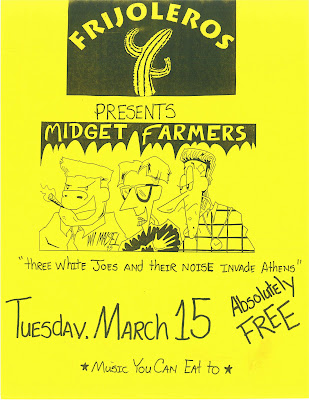 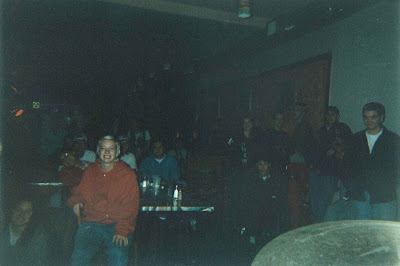 View of the crowd from my drumset. How many people can you name? 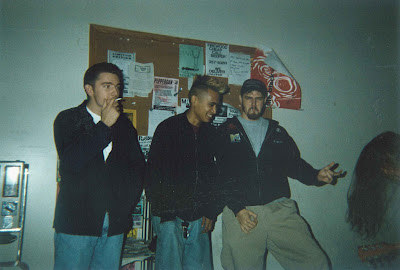 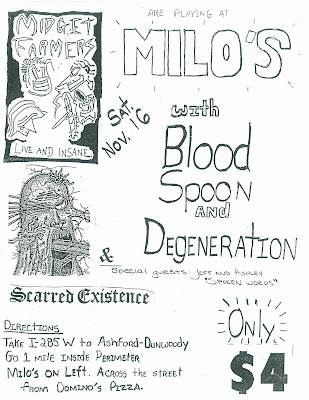 At Milo's in 19991 with Bloodspoon, Scarred Existence and Degeneration. I believe this was one of Bloodspoon's first shows. 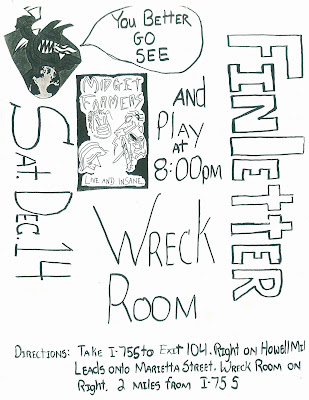 With Finletter at the Wreck Room in 1992 I believe. This was the first time we saw the Finletter guys, and they blew our socks off. 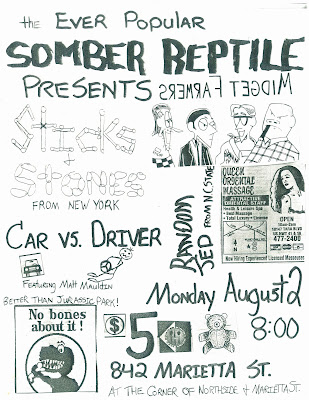 With Car Vs. Driver, Sticks and Stones, Random Jed, etc. at the Somber Reptile in 1993. This was a very early Car Vs. Driver show. 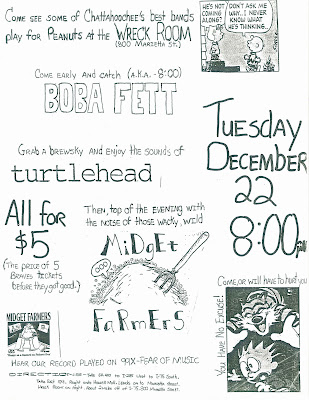 With Boba Fett at the Wreck Room. Boba Fett was also called Barefoot Jamboree, and featured Dewey Tucker on vocals, an old skater friend of ours as well as J.T. Yost, who played accordion and whose parents owned the Dunkin Donuts on Holcomb Bridge Rd. The drummer was Craig Evans, I believe, who played later in Substandard with me and Jon Rothman (pre Car Vs. Driver). 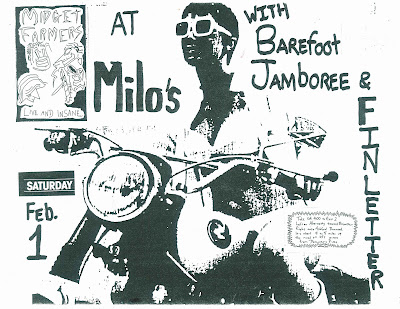 Another show at Milo's, this time with Boba Fett as Barefoot Jamboree and Finletter. This is Feb 1, 1993 I believe. I contributed the girl on the motorcycle picture for this flyer, although I can't remember where it was from. 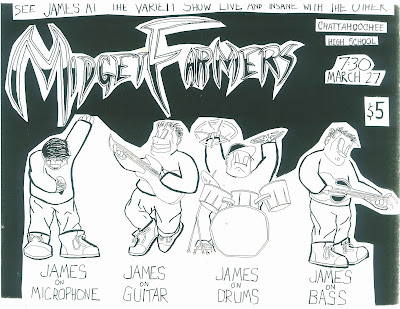 Another Chattahoochee 1992 battle of the bands flyer. This one with the master Ian Maisel drawings. 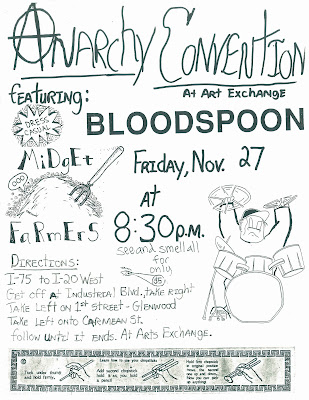 Ahh, the infamous Anarchy Convention show at the Art Exchange building in Grant Park. We played Anarchy in the UK, and the crowd was bummed. I remember Bloodspoon being a lot of fun at this show. 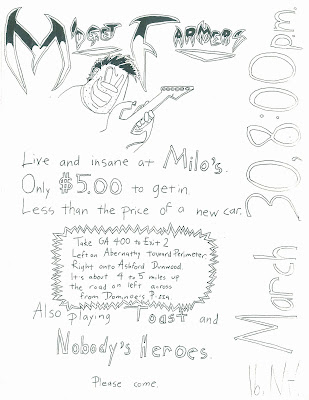 More Milo's flyers from 1991 - this time with Toast and Nobody's Heroes, who I do not remember at all. Soren and his mother from Milo's had a habit of calling you the day of a show to see if you wanted to play that night, and I believe we actually took them up on it a few times. 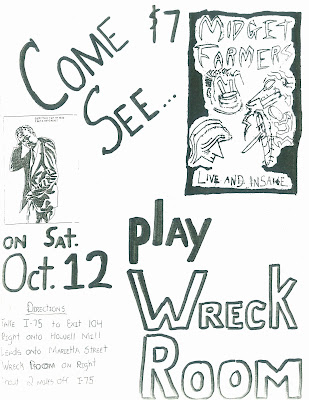 No idea about this one. Just another show at the Wreck Room. 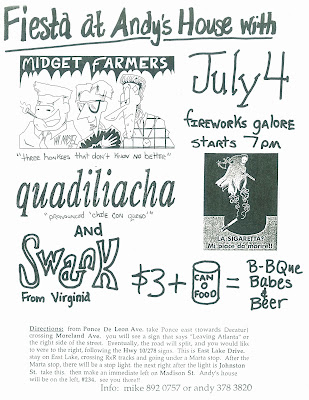 This was a good show at Andy Stivers' house with Quadiliacha and Swank on July 4, 1994. Fun times. 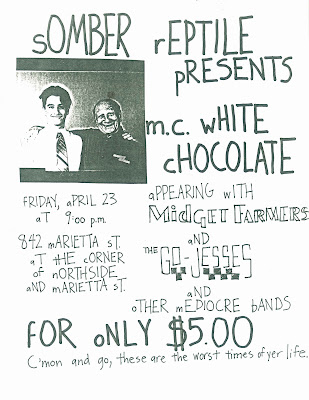 MF with Ian Maisel as MC White Chocolate and the Go-Steadys at Somber Reptile. I believe we were supposed to play I'm Your Pusher by Ice-T, but Ian forgot the lyrics. 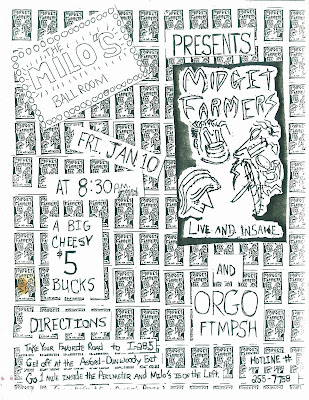 Milos with Orgo Ftmpsh. I have no idea what they sounded like, but with a name like that it was probably awesome. 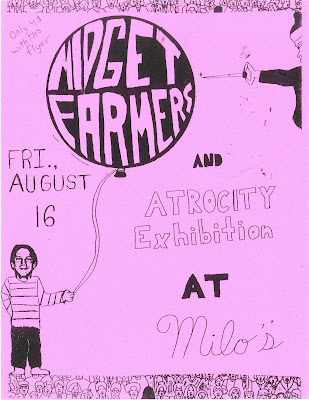 Horrible homemade flyers. This was 1992 I believe. 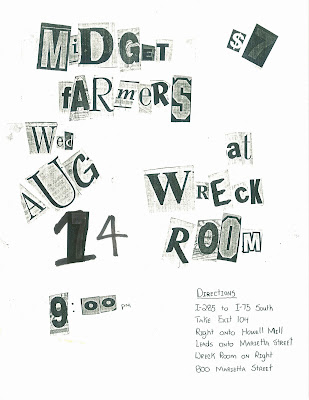 The last horrible homemade flyer for a show at the Wreck Room, in 1992.